To my surprise my three year old girl has ended up being SUPER girly, and I feel a little uncomfortable about the degree to which she loves pink and purples and sparkles. After all, I’m queer and I wear overalls and work construction — though I wear dresses too — and I feel like I’m “selling out” if I let my kid wear that pink “Rapunzel” shirt she somehow acquired and insists on wearing. But I also want to support my toddler in her gender expression, which includes supporting her choice to dress femme.

I realized that I feel like there’s a certain trend in feminist parenting where we totally support little boys wearing dresses and sparkles… but cringe a bit inside when a little girl wants to do it.

Who wouldn't want to be a princess AND Darth Vader? Somebody hand me my pink lightsaber already.

I do keep trying to offer her a variety of clothing options — mixing in overalls, dinosaur shirts, and dark-coloured hoodies from the “boy” section — into her pink sparkle wardrobe of choice. But for those of us parents raised in the ’80s, with unisex haircuts, overalls/onesies for both sexes, and girls in Lego ads, the backlash in options for toddler gender can be surprising. Even when we grew up a bit, ’90s fashion was deeply influenced by grunge — girls wore Doc Martins and flannel, and even some straight boys wore eye makeup and black dresses at parties. Today, children clothes in stores are almost grossly gendered to my offbeat eyes — my kid rolled her eyes when I told her there were “no girl clothes or boy clothes.”

The boy’s section is, in a lot of ways, even worse than the girl’s section! It’s now quite difficult to find anything in the boys section that is not in dark colours or festooned with footballs, gross slogans, camo, or dinosaurs. Not that I’m totally against all of that, but the fact is that little boys clothes have gone over into the deep end of toxic toddler masculinity. Hopefully gender-neutral trends in dress and hair, currently sported by young gender-neutral people, will trickle down into children’s clothing soon.

Let’s raise empowered princesses who can eventually drop the whole princess thing but keep the empowerment.

I think it’s going to be more effective to subvert the whole princess fairy thing with lightsabers and swords and bows and arrows, and raise empowered princesses who can eventually drop the whole princess thing but keep the empowerment. Little girls who know that just because a woman is wearing a dress doesn’t make her less of a leader, that you can choose to wear makeup or not wear makeup, that you can choose shave your legs or not shave your legs, that you can wear a blue work coveralls some days and and heels another day. You can choose to identify as a woman, or as a man, or as neither, and you can choose to be butch of femme or neither, or some magical combination. Feminism and Queer-positive parenting is supposed to be about choice, and that sometimes sometimes includes the choice to explore the identities of princess or a sparkly fairy.

For working class, or any non-noble families really, the worship of princesses can have elements of mimicking our oppressors — after all we were probably just dirt-eating peasants back in those times. But what we are also saying is that our little peasant/working-class kid is just as good as a princess. That all little girls everywhere are just as precious and important and have potential leadership ability as a princess. Some of our feminist parenting attempts to steer clear of princess culture are doomed to failure as our kids become increasingly exposed to mainstream culture on the playground or in daycare. But if we think about the against-the-grain, subversive possibilities of princess culture… it might make it more tolerable when our kid insists on wearing that “Frozen” shirt yet again.

Saying goodbye to the princess phase

When my daughter Violet was a young toddler, she had no use for dresses. She screeched and flailed around if I tried to put her... Read more

While there is plenty that is problematic about toddler princess gender expectations, and most progressive parents correctly attempt to shelter their children from extremes of gendered dress and expectations, there is also another side to this — a celebration of femininity and all things femme. A little girl just starting to express her gender identity, who is tromping around in a sparkly fairy dress, is totally happy and secure. When in the rest of her life is a woman going to feel happy about her gender, her body, being a girl, in an uncomplicated way. She’s going to have to face the real world of gender discrimination, unfair expectations, and harassment soon enough, I want her to build a foundation of happiness in her own skin to help her get through the tough years which are surely ahead. 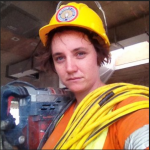 Megan Kinch is a nerdy Mama and electrician apprentice. She was raised in Toronto and her daughter was growing up there too. They share a common love of streetcars and bikes. Her work has been published in Briarpatch Magazine, The Dominion, Basics Community News the 5th Estate and Offbeat Home.

Comments on Why this feminist mom is okay raising a princess