Covid was hard on everyone.

It seems like everyone had either way too much work, or not enough, and either way it was torture. I hit a point last November where I felt like I couldn’t do it anymore. The burnout, the frustration, even the rage. I got to the point where I could barely step into my home office anymore. I had to take a break, and I went on a stress leave.

I’ve never liked my job. And now it had gotten to what felt like a state of complete, futile insanity.

So during this short time off, I had to think really hard about what it was I really wanted to do. I had to think about what I enjoyed, and what I was good at, and what that meant for my future. I recognized that while I’m very sensitive to everyday types of stress, I thrive when I’m thrown into positions of helping others with major stress.

The really big, scary stuff. I could swoop in and be a rock. And it was extremely common for complete strangers to open up to me about… everything. So could I be a counselor? No; while I could afford maybe a year of going to school,
that would be beyond my ability as someone with a mortgage to pay.

I thought about what kind of person I was…

I suddenly mused that the best job for a hippie who’s always been fascinated by death like me would be a death doula.

It was something that had crossed my mind before over the years, but I never took it seriously. It sounded like an unrealistic pipe dream. But now that I had all this time and thinking to do, I decided to look into what it would take.

It turns out that I was looking at just the right moment. While the social role has existed in traditional cultures since pretty much the dawn of time, it only became an official volunteer position with a name in 2004, and I’d never heard of anyone who had been doing it for a living for more than about six years.

Now that so many people were experiencing death all around them, this seemed to be the breakout year of the death doula. And to my great surprise, there was a course being offered for my province. I could do this!

And just a few months later, I began what I hoped to be a meaningful new phase of life.

Death doulas are strongly associated with the growing death-positive movement.

Gradually, starting during the Civil War, death has become cold, dark, clinical, and terrifying. It’s become something we leave to industry professionals to deal with, and no one to talk about. It’s the elephant in the room, hiding under the bed. We know this is wrong, and that it’s time to finally bring it back out of the shadows. We see it not only as something that’s a necessary part of life, but something that can even be beautiful.

For a death doula, the goal is to bring people to a place of peace… not just the dying, but their loved ones as well.

We care about what they care about, and make sure that what’s important to them doesn’t go neglected or unsaid. It’s hard to explain in more detail than this, because a death doula’s job isn’t defined by a specific set of tasks. It’s all about what each individual and their families need.

You’re looking at crones. Can you see the beauty?

In our society, it is not acceptable for female-identified people to age. We are all downloaded with the message that we are supposed to look... Read more

We may explain what needs to be done and considered, what options are available, help them create legacy projects so that a piece of them will always be left behind, and help people determine what the meaning of their lives has been. We create beautiful rituals. We get them ready to go.

Most doulas take on clients, though we don’t really call them clients – to us they’re our people. Many educate the public, sort of a relationship counseling between society and death. Some specialize in certain areas – LGBT+ people, pets, children, even miscarriage. I’d like to do remote work, so I can reach people wherever they are.

Afterall, this is the dawn of this profession, so not everyone will be able to find someone locally. We believe everyone who wants a doula should have access to one.

I feel like I’ve been studying for this my whole life.

Now I’m putting what I know into a workbook, to make guidance more affordable, and accessible for those who prefer to guide themselves. Of course, a book like this needs to be relevant to local laws, availability of services, and the dominant cultural groups. So there’s a lot more writing yet to be done.

I’m still stuck at my desk job, but hopefully not for long. My drive to do something meaningful and fulfilling is pushing me forward, no matter how busy in the meantime I get between the two. I’m planning my escape, and as soon as possible, I’ll be right there with you to plan yours. 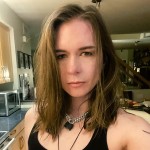 I am a banker by day, death enthusiast by night, doula the second the phone rings. I hope that one day our journeys will intertwine and we can walk together, just for a little while.

Comments on What’s a death doula? (And why I became one)