We just wrapped up the most wonderful time of the year: PRIDE MONTH!

But that doesn’t mean we should stop talking a lot about what it means to be on the LGBTQ+ spectrum.

Some people have asked me: if I identify with a term today does that mean you always have to identify that way? The answer to that question can be complicated and contentious. Here’s my take:

My heartfelt advice: Don’t worry so much about labels. Labels are great, but, in some ways, they’re also for cans.

Travis Alabanza is a London-based performance artist, writer, and fashion gurl. Released in 2017, Travis’ stunning chap book, Before I Step Outside (You Love Me)... Read more

The problem stems from people believing that with a label comes a set of unwritten rules about how to dress, speak, and behave. I can assure you, there is no official LGBTQ+ handbook. You being able to do you is what our movement, at its core, is about.

There are plenty of people who identify as one way but act another. How many straight men secret off to gay bars? Is he closeted? Is he just a straight guy who likes to have sex with men occasionally? Who knows?

It also happens that people who identify as one of the terms on the LGBTQ+ spectrum might behave differently than the strict sense of their term one time or many times, but it doesn’t have to change their identity.

You’re a gay man and you sleep with a woman, so does that make you not gay? Will the gay police descend upon your apartment and forbid you from ever again using the term again? NOPE! If you feel like you’re gay then you’re gay! You don’t have to change a label based on your activity. Make your label(s) work for you.

Gender and sexuality can evolve throughout your life. Not for everyone, but some people. I believe this happens inside and outside the LGBTQ+ community, but we have words to match our experience.

You may want to change your label to reflect this evolution, but you don’t have to. As for myself, I’ve been attracted to different people throughout my life and I’ve expressed my gender in different ways. This somewhat had to do with where I was in life: the job I had, where I lived, what I was creating, and gut reactions that I can’t explain, but had to acknowledge. Evolving gender and sexual identity is just the way it’s rolled for me.

So I chose to change my identifying terms to match my experience. At first I identified as bisexual, then lesbian, then queer, then genderqueer queer, then queer, and now I feel like I’m more of a queer dyke.

Along the way I married a cis-gendered straight man, something I would have never imagined for myself. When I first met him I was scared shitless that people might no longer consider me “queer enough.”

“Are you a boy or a girl?” How do you explain gender to a child?

But that’s not what happened all. In fact, some of my most politically queer friends convinced me that not investing in this relationship was counterproductive: isn’t loving who you want to love what we’ve been fighting for all along? I had to agree.

So if you feel your gender or sexual preference start to evolve, if you’re questioning yourself for the first time, or if you just happen to meet someone who was outside the box for you in all different ways I say  —  bless you and go forth!

Be happy, do you, and screw the naysayers.

Choose whatever label you want. Choose something today, and then choose something different tomorrow. You don’t need anyone’s approval for being who you want to be, just go freaking do it.

And make sure to be proud as fuck.

Coming out is not something that happens once and it's over. The first time I came out was with a bang. The anxiety accompanied with the initial big reveal has faded. Nevertheless, I continue to experience coming out of the closet over and over again... 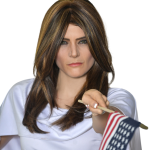 Lauren LoGiudice is an actor, comedian, and character chameleon originally from Queens. Lauren’s work has been featured by The New York Times, McSweeney’s Internet Tendency, BBC, Roma C’e’, Bust Magazine, and NY1, among others. MothStorySLAM Champ. Her 15+ characters make her followers laugh-cry on Instagram @laurenlogi. Her breakout Melania Trump parody channel is @flotusofficial. Her book Inside Melania: What I Learned About Melania Trump by Being Her is coming soon.