As I pushed my daughter in the cool spring-like air I felt a warm hand grip mine all of a sudden, holding on tightly and pulling at me. Considering that my older son was flitting around in another area of the playground, I knew the hand that gripped mine was an interloper. I looked down to find a boy, younger than my son, older than my daughter, looking up at me and pulling me towards the swing next to mine.

I’m a parent and I love kids, so if some random kid on the playground wants to grab my hand and silently suggest that he’d like a boost into the swing, I’ll oblige. So I did, and moments later his mom rushed up, embarrassed, apologizing, clearly flustered that her apparently non-verbal child had accosted a total stranger in his search for a turn on the swing, that I was having to deal with her weird kid. I smiled at her and assured her that it was no problem for me to help her son. But I wanted to tell her something else. I wanted to tell her that I understood more than she realized.

Parents of weird kids, you are not alone.

How do I know this? I am the parent of a weird kid. The one that was flitting in and out of the play equipment, a flash of red and fluffy blond hair. The one that is currently upside down on my couch as I squeeze in a few minutes of writing between wiping runny noses and preparing dinner. The one that rarely just walks but goes through life dancing by my side.

Life with a weird kid is isolating. You spend a lot of time tamping down that parental anxiety when your kid is freaking out and it seems like all the other kids are sitting nicely and cooperating. You explain over and over that your kid just doesn’t like circle time or story time or most organized activities. I’ve learned over time to respect my son and the way he functions, and there are a lot of activities we simply cannot do because he can’t handle them. I’ve learned that the reason it seems like all the other kids can cope is that the parents with the weird kids are staying home. I’ve felt completely and utterly alone as seemingly everyone else went around with their perfectly normal, average kid.

The Incident: my son was bullied for having gay parents

A few months back, I wrote that my son had never been bullied at his Texas public school. Perhaps it was inevitable, given that Waylon... Read more

The playground is the great equalizer. All kids love to run and jump and play. All kids love to swing, especially my non-verbal little friend, who later rummaged through my bag, whipped off his hat and put mine on. His mother apologized profusely again and I grinned and proclaimed it rather cute. After all, on a previous visit my kid was the one running around after a group of older boys and hissing at them. When I asked if he was trying to play with them he just replied, “I like to hiss.” The playground is where the weird kid mixes in with the other kids and you get those anxiety ridden parental interactions because they know their kid is not the norm, that he or she is someone special.

Call it what you will. High-Functioning Autism. Quirky. Walking to the beat of a different drum. Sometimes I call it having a weird kid, because, honestly I have a weird kid. For my son the official label is sensory defensiveness. He is a wonderful boy who spends a lot of time responding to stimuli in his world. As he grows older and more aware, we will work with him, and for him, to be the best he can be while remaining true to who he is. I know he’s my weird kid but all he knows is that he’s a boy who loves Angry Birds, Star Wars, and his parents, and I work hard to keep it that way.

Later that day my son and I went to Trader Joe’s and we came across another mother and son shopping. The mother was reminding the son to watch his body space, to be aware that we were behind him, using a mildly irritated tone. I know how she feels. About the one millionth time you remind your kid about the social mores we grownups take for granted, about the basic sense of proprioception most of us don’t even think about, you feel fatigued. I smiled again and told her it was totally fine. Because it was. Later the same kid came up and told me where the stuffed animal that gains you some sort of treat was hidden, a little awkward, a little abrupt, but he was open and sweet and willing to talk to an adult instead of being shy, and thoughtful.

So, parents of weird kids everywhere, you are not alone. We’re out there, but not always in plain view. We’re on the playground. We’re in the stores. We get it, and we’re happy to have your kid be his or herself around us, just like I was perfectly happy to hoist a kid who wasn’t mine, who could only make a request by placing his hand into mine, into the swing and push him for a little while on a warm springish day. 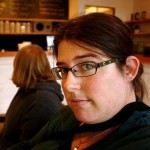 I am a parent, spouse, and registered nurse. I live, learn and love in Seattle with my wife of 20 years and our two amazing kids. On any given day you can find us playing in the park or sitting on the shores of Lake Washington throwing rocks in the water or eating ice cream or having a good time with our friends. If you see someone walking down the street with a boy dancing by her side, that's me. Life is good.

Comments on I am the parent of a weird kid, and I know I’m not alone