After we got married our goal was to be settled in a house by our first anniversary. For three years we’d been living in a 468 square foot second floor apartment in a suburban area. We loved our apartment but we wanted to move back to the country where we’d both grown up. We missed seeing stars, squirrels, deer and trees. Due to the generosity of our wedding guests we had enough money set aside for a decent down payment and the spring after our wedding started our search in earnest.

This was our initial wish list for a house:

Offbeat House Hunters: Our experience home shopping on a budget

Who here loves HGTV's "House Hunters"? Let's play the Offbeat Canadian Home version with three houses for $150,000 or under." Which one will they choose!?

We also knew some things we DIDN’T want:

We did not want a ranch style home or an open floor plan — open floor plans are a huge pet peeve of mine. If I’m in the living room I want to be in the living room. As we searched homes online our criteria became more specific and eventually I developed a checklist of 35 different items which included things like commute time, utilities, layout and even weirdly-specific things, like if the kitchen had a double sink. When we found a home online that looked good we would fill out the list and score it before making an appointment to tour it. If a home scored less than 60% on our checklist we wouldn’t bother seeing it.

Kitchens and that are “updated” seem to be a main selling point of homes, but we don’t like to cook so we couldn’t really give less of a crap about a kitchen if we tried. We also HATE hardwood floors and really prefer homes that have some original details. Our realtor was a really good sport and we ended up touring a total of thirteen homes. Because of our relatively modest budget many were vacant foreclosures or estate sales, some were complete and utter disasters, and some were just downright weird. BUT there were a few gems along the way that we really loved and seriously considered…

This house was absolutely amazing and had so much of what we were looking for. Throughout our search we’d been really drawn to the Cape Cod style. This one was very spacious, had a lot of great woodwork, and cool details like working saloon doors in the dining room.

There was a master bedroom addition on the ground floor that I swear our whole apartment could have fit in.

It also had a lovely screened in porch and a really cute shielded grove area out back.

We are a single-income family of two (plus our pet rats), and while I'm the only breadwinner, I am fortunate to make a comfortable salary.... Read more

The coolest thing about this house was all the custom built in cabinetry all over the place. We would never run out of storage space. A huge plus for me was that this home was literally on the same street as my work, so by car I’d have about a two minute commute.

No house is without its problems though. At least, no house in our price range. The carpeting throughout was in rough shape, it had no water heater, there was water damage on the upstairs ceiling, and worst of all the super cute porch was visibly sloping. Also, the bathrooms were fully carpeted which struck us as really weird.

The estimate for fixing all this was about 15k, with 8k going to the porch alone. We discovered that it was an estate sale so the sellers were not at all interested in fixing anything and wanted it sold as is.

This house was so much better in person than online. It had both an L-shaped porch in the front, and a deck out back that had privacy walls.

There was both a breakfast nook in the kitchen and a separate dining room with a window seat.

The living room had a pellet stove which would keep the heating oil costs down.

The part about the house we loved the most was the upstairs hallway. I know that’s a really weird thing to love, but we’re kind of weird. It was shaped like a Tetris piece so at the top of the stairs it went left, then left again, then right. As soon as we saw it we thought it would a great setting for a short horror film.

Bad points about this house were mainly due to the location. It was set on a peninsula in between two streets so there was traffic on either side. It had a cool pull through driveway so you could enter and exit from either street, but there was no garage. It was also nearly an hour away from my husband’s work. But unlike the Customized Cape Cod it was in move in ready condition which was a huge plus.

We were wary of this house mainly because of its proximity to other houses. The lot was a rectangular shape so while it had an expansive lawn in the back there was only a narrow strip separating it from the houses on both sides. It would have definitely failed our mythical rock throwing test.

The inside was way bigger than we were expecting based on looking at it from the outside. It had a combination kitchen/dining area, a really large living room, two bedrooms downstairs along with a full bathroom, then two more bedrooms and a bathroom upstairs. The bedrooms were all gigantic and the two upstairs had these amazing little alcoves.

But the room that blew us away was the four season porch off of the dining room. An entire room full of windows with electric heat so it could be used year round. It was the brightest, airiest room I’d ever set foot in.

Downsides to this house were mainly limited to the outside. There was a retaining wall next to the driveway that was leaning, the front stoop roof was sagging, it was obvious that the shrubbery hadn’t been trimmed in ages, and there was some cracking pavement in the driveway. Other than that it seemed to have been very well maintained.

So which house did we go with?

We set out to find a cozy, three bedroom house in Portland (preferred) or South Portland, with a small but usable yard space. We weren't... Read more

It was a tough choice. The Customized Cape Cod was wonderful and cheap but needed the most work. The Horror Movie Hallway was great but my husband’s commute would become a huge problem. The Four Season Porch seemed to be in the best condition but was at the very top of our price point. We ended up choosing…

…The Four Season Porch! We were able to overlook the close proximity of the neighbors because everything else about it was exactly what we wanted or better. The estimate for the needed repairs came to 3k so we submitted an offer for $117,000 which was accepted. After our inspection revealed a super high radon level that would have killed us in our sleep we had to renegotiate for either the sellers to install a mitigation system OR drop the price to $115,000. They installed the system and we took care of $1,200 worth of other repairs that were necessary prior to moving in.

Every month it seems something else breaks. Thus far we’ve had to have a major repair done to the furnace, had a bunch of leaking pipes to contend with, a wasp infestation, a dead dishwasher, a window that just shattered for no apparent reason, and numerous other small annoyances.

But as I sit and sip my morning coffee on our awesome porch while the cat watches birds, I know that we made the right choice. Now that we’re here I can’t imagine ever living somewhere else. We have definitely found our forever home.

Everyone's buzzing this week about HGTV's House Hunters being fake. Instead of acting outraged that a staged reality show is staged, I say LET'S DRINK! Wanna play it with me? Here's how.

We LOVE our Offbeat House Hunter stories! If you have one to share, feel free to submit it over here. Can’t wait to see which one you chose! 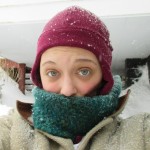 Secretary by day, pajama clad theater geek by night, Brink makes her humble home in Northeastern Pennsylvania with her husband and one truly terrible feline companion.