My partner and I spent over three years house hunting in Ottawa, Ontario. We dragged our poor real estate agent through a seemingly never-ending series of former grow houses, condemned buildings, and major fixer-uppers (like this).

We spent hundreds of dollars on inspections, made several offers (a few of which were even accepted) and had mortgages approved, but thanks to bad luck and a number of unfortunate events, we never got a house.

So we were still living in our tiny, smoke-filled, rental apartment (which we had moved into as a “temporary” arrangement to save up money for a down payment), when I was offered a job in the Yukon. It was just two months before our wedding, but adventure called!

Things we quickly learned about Whitehorse: The rental market in recent years has been at almost 100% occupancy. Rent is therefore high, and would be significantly higher than what we were paying to live downtown in Canada’s capital. House prices are comparable to some of Canada’s larger cities, so we could expect to pay similar prices to what we had been looking at in Ottawa

After crunching the numbers it was pretty clear that if we could find a house, it made sense to buy.

A bit about us as home buyers: We are a single-income family of two (plus our pet rats), and while I’m the only breadwinner, I am fortunate to make a comfortable salary. We’re pretty handy and not afraid to tackle home projects (as evidenced by the sort of places we were looking at in Ottawa). We’re environmentally-conscious city-center dwellers and wouldn’t be comfortable in the suburbs.

Offbeat House Hunters: Our experience home shopping on a budget

Who here loves HGTV's "House Hunters"? Let's play the Offbeat Canadian Home version with three houses for $150,000 or under." Which one will they choose!?

We didn’t have much time to house hunt, so we decided to see every place that met our requirements, which was a total of 9 houses. Two were about to fall down on top of us, and four were almost an hour walk from my office, which left three potential homes…

All original to 1976, this house had it all: shag carpet, basement bar, and wall-mounted rotary phone! It was a perfect time capsule, and in surprisingly good shape. We loved that we would be able to move in right away and slowly bring it into the 21st century. The asking price was higher than the other contenders but it was still manageable, and unlike many places we had looked at, this house only required cosmetic upgrades and not expensive repairs.
But it was so much house! After living in our small one bedroom apartment, four bedrooms seemed like overkill. It was also located in a very suburban neighbourhood and we weren’t sure if we were prepared to tackle life in the ‘burbs (even if we could still walk to downtown).

The next house to tickle our fancy was a weird one. Located on the back half of subdivided lot, it was a tiny 1000 square foot duplex, which had both units rented out. There would be one two bedroom unit for us, and another two bedroom basement unit. The prospect of rental income was very enticing (especially given the high rental rates) and the asking price was lower than anything else we were considering. An added bonus was that it came fully-furnished, so we wouldn’t need to worry about moving our stuff cross-country or buying new.

While we were used to living in a small space, the two bedroom unit was smaller than our one bedroom apartment, and didn’t leave us much room for crafts or other projects. Being on a half lot was also a potential nuisance as the house could only be accessed from a back alley (no hope for pizza delivery or door-to-door mail service). And after living above some very loud chain-smoking neighbours in Ottawa, we weren’t sure if we really wanted to deal with basement tenants.

House #3: Downtown house and a half

Another oddball of a property, this little house shared its downtown lot with a small detached garage and backyard office/studio space. The location, just 10 minutes on foot from my work and even closer to restaurants and shops, was ideal. There was a big kitchen, two good-sized bedrooms and a nice bright living room.

While the backyard studio was practically new, the rest of the property was not. Over the years the main house had been worked on by a number of handymen, some with more skill than others. The homeowners were leaving the territory, but not immediately, so purchasing this house would mean that we would be living out of a motel for a while.

Which one did they choose?

The same day we toured House #1, we got a call from our agent to tell us that the owners had just accepted an offer. No ’70s house for us.

The math for House #2 was too good to pass up. The rental income from the basement suite would help cover our mortgage payments, and we figured we could put all those savings towards a bigger home a few years down the road. We put in an offer that was accepted, and we hired an inspector who gave us nothing but good news. Everything was going great. And then the bank turned us down.

The trouble was, there were no comparable properties, so the bank’s appraiser wouldn’t approve the mortgage at the price we’d offered. The seller wouldn’t budge on the price, so House #2 was out.

So that left House #3, our new home! In the end, I think we’re happier here than we would have been at either of the other properties. We love being close to downtown and we’re slowly making the house feel like ours.
Here’s my husband giving a quick tour of the house shortly after we moved in: 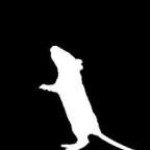 Allison shares her home in Whitehorse, Yukon with her partner, Chris, and her pet rats. She is often found working on elaborate costumes, making things from other people’s junk, and creating delicious new ways to consume alcohol.