Truth is, I always thought it would be rather difficult to change the fabric on a piece of furniture. Turns out, it’s WAY simpler than I thought!

The eye-sore: Our cheap kitchen chairs

Currently, our kitchen table set is a starter set I picked up when I moved to Wisconsin to live with my then-boyfriend-now-husband. Three years later, it’s still holding out, but the chairs have always annoyed me.

Covered with a creamy tan fake suede, they’re difficult to clean, attract pet hairs that refuse to come off, and the padding’s thin and shifts everytime the sitter wiggles. After three years, it’s normal to be sitting mostly on hard wood, not cushiony-softness!

Kristen took a $40 pair of Craigslist chairs that had CLEARLY seen better days and gave them a painted, glazed, and upholstered makeover that is... Read more

What to do? I thought about either buying or making some new cushions to sit on top of the chair…you know, the type that has ties and secures to the back of the chair. But that cream colour was gross, and the cushions would probably be just as annoying. So I made my first attempt at reupholstery.

Once I decided to try my hand at re-upholstering the existing seat bottoms of four chairs, I had to decide what I wanted them to look like. I opted for solid black, using a flat bedsheet from a jersey knit sheet set we retired. I thought it would be a good choice — I already know it doesn’t attract kitty hairs, even on occasions when the cats hang out on our bed all day.

How to do it yourself:

These instructions work for chairs that have a cushion attached to a steel frame.

The existing cushions were screwed into the metal frame. I simply unscrewed them using a screwdriver.

Once they’re removed, you’ll be left with just the frame intact.

We also recently acquired a new mattress cover, so our super old 1″ memory foam bed also got upcycled into new chair padding. At this point, you can choose to remove the existing padding and fabric (if it’s very old or gross). Since ours wasn’t terrible, I decided to put our new covering on top of the old, to make the chair seats poofier than they were before.

I removed the lining from the back by simply pulling it off the staples. Starting on one side, I attached the foam using the staple gun. Unlike the previous padding, I made sure the foam went right over the hard wooden board, so that it wouldn’t shift and leave us sitting on a wooden corner like before.

Next, I did the opposite side, pulling it tight before securing it.

After all four sides of the foam were attached and trimmed of any excess foam, I had to get the corners to lie nicely. Using a trick from hand-covering books, I cut a slit in the corners about an inch away from the edge of the cushion. Then, I took the two loose pieces and folded them into each other, and secured with staples, as shown (the cut went to the bottom of the point).

I followed the same steps with my fabric: secured one side, then the opposite side, then the other two sides. I folded the corners back neatly, as you would when tucking a flat sheet under a mattress. Everything gets secured with the staple gun and trimmed of excess fabric.

The nice thing about having all the staples on the bottom of the chair where no one can see them is that you don’t have to be afraid of over-stapling!

After the fabric was secured, I re-attached the lining. If you don’t have a lining on the back of your cushions, you can attach other fabric to smooth out the bottom and keep the edges of the padding and cover from falling down and detaching.

After the cushions were re-covered, I had to re-attach them to the chair frame. I was a little worried at first that by folding the foam over the edge of the board, I had made them too thick to re-attach. My fears were irrational — they re-attached just fine!

To make sure I was getting the now very poofy cushions flush to the edge of the chair, I set it upside down on our coffee table, and used my body to hold the frame in place while I screwed the cushion and frame together.

Brand new chairs that we’ll get a lot of use out of for many more years! And now I have the confidence to make all of our other furniture much more funky-looking.

Want to start planning your new upholstery project? We happen to have sources for rad fabric. 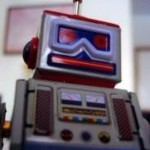 Lenna is a designer, crafter, and tap dancer that lives outside of Toronto, Ontario with her husband, Matt, and three cats, Angel, Homoton, and Emily.

Comments on A photo guide on reupholstering metal-framed chairs