I graduated from college three years ago. I stepped off that stage, smiling brightly, clutching my shiny new art degree, ready to etch my name on this world. The air was sweet with promise. A few years went by and that smile was replaced with a scowl and the air tasted bitter with resentment. I looked at my list of life goals and realized that most of my dreams were still just dreams. I was crestfallen and, quite frankly, furious with the world for doing this to me.

The economy is in the crapper! The middle class is shrinking into non-existence! The job market is bleak! I spent a few years becoming more and more frustrated with the world. One day I realized something, it wasn’t the world; it was me. It was actually all my fault.

I’m not trying to play the martyr here, but it seriously was my fault. I got a degree as an artist. I knew from the start that it wasn’t going to be easy, but I had the talent, the passion, and I had those damn dreams. I also had something else though: fear. Fear of failure and fear of success. That second part might sound really dumb, but I did. Let me explain.

I hadn’t been sitting around twiddling my thumbs for three years, I had been working hard. I searched for freelance gigs and full-time art jobs. I decided to start attending life drawing sessions. I came up with about twenty different ideas for bodies of artwork that support a cause I’m passionate about. I wrote three children’s books. I added new work to my portfolio. I sculpted custom art toys. I designed a mobile app. I started a social network with a programmer friend. Dude, let’s be honest, I sound kinda awesome.

Except, my fear of success killed every. single. one. I never went to a life drawing session. I did one or two art pieces for each concentration idea and then abandoned it. I never submitted my children’s books. I wasn’t forward enough to snag an opportunity in the designer toy market. My mobile app was killed. The social networking site still says “Coming soon” despite putting six months of work into it. I only applied to three jobs — of the hundreds I looked at and bookmarked, only three.

Why the hell would I do this? Am I lazy? No. A hard worker? Definitely. Unreliable? Not at all! I was simply afraid.

One of the fantastic commenters of Offbeat Home recently referenced "Impostor Syndrome" in a comment that Ariel then picked up on. I felt the need... Read more

I was comfortable in my little life. Nothing pushed me outside of my comfort zone. The world outside my bubble was scary. If I were to actually succeed, I might choke. I would be forced to learn new things and stand out. Some part of me just wanted to blend in with the crowd. If people noticed me, they might not like me. They might not like what I do. I’ve abandoned ideas if I thought people could get upset or offended. Also, if I succeeded, then I could fail. If I didn’t aim high, maybe the fall wouldn’t kill me, but that means I could never reach those mountaintops. This is where my fear of failure is all wrapped up in my fear of success. So instead of pushing through my fear, I just stopped. My fear wins.

Fear is nothing more than an instinctual response to perceived danger. But, unless that life drawing session is filled with rabid velociraptors, there isn’t any real danger.

Now, I wouldn’t say those years were a waste. I drew, a lot. I dabbled in a bunch of different things and now know that I have a love for drawing animals, and that I should probably leave the social network-building to Zuckerburg. Of course, I wish some things had gone differently. If given the chance, hell yes I would jump in a Delorean and gun it to 88 miles per hour. Since that wasn’t an option (yet!), I realized I didn’t want to feel haunted by the “should haves.” I needed to give myself a fighting chance.

Fear is nothing more than an instinctual response to perceived danger. But, unless that life drawing session is filled with rabid velociraptors, there isn’t any real danger. I needed to change the only thing I could control: how I responded to it.

You may not be as bad as I was, but I’d bet that at some point that fear has stopped you from doing something. There was a Zumba class you were itching to try, but you’re a bit clumsy. Maybe, you wanted to ask out that cute barista at Starbucks, but what if they actually said yes?! Perhaps, you were going to submit a guest post to an awesome blog *wink wink*, but you don’t think you have anything worth saying…

Well, I’m here to tell you, get the hell on with it! If you feel nervous or get those nagging butterflies at the thought, you are probably headed in the right direction.

Now, I live by my fear. If something makes me nervous, I do it, no matter how large or small. I submitted work to an art blog I follow. I cussed in front of my mom. I went to a life drawing session (and there were no raptors). I started conversations with strangers. I posted a cheeky Doctor Who drawing on my tumblr. I drove across the country with my friend and got caught in hurricane Sandy.

You may stumble along the way, but don’t let your fear stop you. If you’re reading this, then I guess I went through with this too. I am afraid, but it’s okay. Fear means “I’m finally doing it right. Hello world, I’m coming for you.” 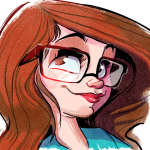 Mallory Carlson is an artist and computer instructor living in Southern California. She is a big nerd who loves bunnies, Back to the Future, and cartoons. When she isn't sleeping or eating, she's probably doodling on anything she can get her hands on. Visit her portfolio or her tumblr blog.

Comments on Killing my potential: I have a fear of success