“But you don’t look Jewish!”

So goes the story of my life as a Hispanic-Jew.

My mother’s side of the family hails from Puerto Rico, and religiously-speaking every member is completely Roman Catholic. I’ve spoken broken Spanish my entire life. My father’s entire family is made up of Russian Jews, and as a baby I was converted into Judaism.

These are just a few terms I created or adopted over the years to add levity to the confusion people would experience when they learned about my ethnicity. I grew up on Long Island, New York, where there was a very high population of Jews. It was common to see symbols of both Christianity and Judaism, especially in public schools. Seeing Stars of David alongside Christmas trees and crosses on school windows, the walls of department stores, and in newspaper advertisements was commonplace. This dual expression of spirituality perfectly reflected my own household.

It wasn’t until my teens that I started to feel like I was being torn into two whenever I thought about identity: am I a half-Russian Jew, or half-Puerto Rican?

I spent every Christmas between the ages of two and 26 with my mother’s family — it’s “their holiday.” I’d light the menorah as my Catholic cousins stared and snickered (although they’d stop laughing when they’d see me open my Chanukah presents days before they could even touch their Christmas gifts). I remember feeling left out when the whole family would leave my father and me at the home of my grandparents while they headed out to Midnight Mass on Christmas Eve.

If I can say anything at this bleak hour, with the world splitting at its seams, it's this: conservatives, I understand you. It may not... Read more

For years I struggled with not feeling “Jewish enough” or “Puerto Rican enough,” and these feelings lasted for years. To this day, at the ripe age of 28, I still have an internal struggle and a feeling of not having an ethnicity. I sometimes wish I could be like my Muslim friends who “look Muslim” and go to a mosque. I sometimes find myself envious of my Christian friends who have Irish, Italian, African, or French ancestry. I wish my faith could “better match” my appearance. I long to speak better Spanish so I can fit in with my mother’s family, but at the same time worry that speaking Spanish could put me at risk of being even less Jewish.

I don’t know if I’ll ever feel “Jewish enough” or “Puerto Rican enough.” Until I hit that day of epiphany, I’ll continue to fast on Yom Kippur, put up a Christmas tree every December, and break the ice with, “I’m probably the only Puerto Rican Jew you’ll ever meet.” 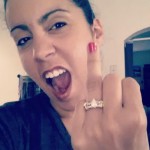 Comments on One day I hope to be enough: my experience growing up with dual ethnicities