Skip to content
When I was in 4th grade, there was a girl in my school named Jessica. Like many things about Jessica, her hair was perfect. Blonde, thick, and shiny, it fell down her back like a heavy curtain. A small flip of her head resulted in a golden wave of hair, a solar flare from the brightest sun. You had to shield your eyes. One day she pinned her hair back with unicorn barrettes, and I thought I might die from jealousy and desire.

My hair is, and always has been, curly. Unruly, wild curls. Frizzy, big curls. Messy. My hair didn’t grow down, like Jessica’s, my hair grew out.

Up until late high school, I had never had long hair. Nothing cascaded down my back except sweat in the summer. My hair wouldn’t hold a barrette and it had an aversion to combs. It wasn’t as beautiful as an afro or tight enough to control. It was just crazy.

At night, alone in my room, I would pull my nightgown back over my head and let it hang there, pretending the soft cotton against my shoulders was my own hair. I’ll just buy a dark nightgown, I would think, and go outside with it on my head. No one will know! These were the thoughts of a desperate idiot.

At some point, I realized that I had to stop being weird. The nightgown would come off and I would stare at my mushroom head, full of loathing.

At eight, I got a perm. The thinking was that the only thing that could control my curls was more curl. I probably don’t have to tell you that this is not the type of reasoning that will get you into Mensa.

How my armpits inspired me to make conscious choices

I haven't shaved or waxed my armpits in five years. And, until recently, I hadn't given it all that much conscious thought, beyond the dull... Read more

By the time I reached 9th grade, I wore my hair in a bun every day. I couldn’t risk anyone seeing it in its natural state.

I didn’t hate my hair in a vacuum; these thoughts were not mine alone. As the only person in my house with curly hair, I don’t think my parents knew exactly how to deal with it. My mother and father couldn’t comb my hair without causing me pain.

Nothing can be done, I heard. It is what it is. A head shake, a sideways grin, a pity glance. These told me that my hair was going to be my life’s burden. And that other people hated curly hair, too.

As I got older, curly hair became a conversation starter, though not always a pleasant one. People will tell you exactly what they think about your hair, unsolicited. They don’t like it; they know someone with curly hair who can’t keep it under control; or do you know about such-and-such product that could really help you? I have even been told that men do not prefer curly hair.

Curly hair is intrinsically tied to ethnicity, and people are not shy about asking me if I’m Jewish, Hispanic, mixed. Nothing reminds you how deep racism goes in our country when curly hair, often a trait of people of color, is marked as undesirable. Black women, more than anyone, battle a constant barrage of opinions whether they straighten their hair or keep it natural. They’ve been told their hair is a “corporate don’t.”

Despite these cultural messages, somewhere around college and after, I stopped fighting my hair. I got tired of hating it. Correction: I didn’t have enough time to hate it. The act of leaving it alone became its — and my — liberation. I let it grow out all the way instead of cutting it back like an unruly hedge. As it grew longer, it became better and better. The curls, once springy and vibrant, became weighted down and formed sultry S’s. I went to stylists who understood curly hair and gave me tips for styling it and what products to use to keep the curls spry. Products that would actually enhance the curls, play up a characteristic I had once hated.

But it wasn’t just the appearance of it that had changed. I had changed, too. I started to see the value in having hair unlike other people. I liked that I didn’t have to do too much to it, not even blow dry it, to have a nice head of hair. I liked that the curls caught the light just so. I liked that I sometimes had romantic heroine hair.

More than anything, I liked that it became a part of my identity, how people came to know me. My hair is joyful and a little on the fringe. It’s multidimensional and twisty in its thinking. It looks like maybe it would be a good dancer. Curly hair is me.

It still has its unruly days. I keep bobby pins on hand for those occasions, and I forgive myself for the days I can do nothing with it. I imagine it’s what living with a teenager must be like: you love it in spite of itself.

There are still days I see a sleek bob and wish my hair could do that naturally. It can’t. But bobs can’t curl, either. Of course this isn’t a competition. I’m not looking to win anything. Jessica from elementary school had beautiful hair and probably still does.

The difference is that now I believe I do, too. 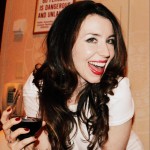 I write screenplays, fiction, and other flights of fancy.

Comments on Wild and crazy: A curly hair journey to acceptance