I didn’t care about the election for most of the campaigning. I was raised to never vote for a Clinton, and I knew I couldn’t support Trump. I didn’t even think his campaign was real. (Sometimes I still wonder.) I was a libertarian before I voted on November 8th. I thought that people would take care of each other and we don’t need all of the interference. I just wanted to be free to do whatever I wanted, as long as I wasn’t hurting anyone else. This election changed that for me. I realized that maybe we do need to do more to protect our own people.

Because this is more than losing an election. It’s more than Donald Trump. It’s that I thought this country was getting better, and it’s a smack in the face to realize that it’s not.

During this election cycle, I was sexually assaulted by a man that I had told just hours earlier, “I don’t like you. You’re the type that just takes what you want.” Now that type of man is my president-elect.

I have this super awesome talent for thinking of the perfect thing to say hours later. A talent which is not in any way useful... Read more

Overall, I’ve been dealing with my assault very well. I’m privileged to have resources, a support system, and a relatively good mental health capacity (or at least, well managed… shout out to meds, you’re the real MVP). Even still, I felt very alone. I can’t even begin to imagine what it’s like for my brothers and sisters that are not afforded these same luxuries.

If you’re fortunate to have not had these types of experiences, I’d like to tell you what goes through a survivor’s mind.

The election of Trump brings all those questions bubbling up again. You see, Trump has been accused of sexual assault. We’re all familiar with his famous “grab ’em by the pussy” remarks. He dismissed accusations because the woman wasn’t pretty enough for him. As if she doesn’t deserve it.

…And she doesn’t, but not for the reasons he’s stating. He’s comparing sexual assault to consensual sex. He believes that a woman’s worth really is written by whether she is attractive enough to be taken by a man. That women should be honored and flattered if they’re the chosen ones.

I don’t think that everyone who voted for Trump actively believes that a rapist should be the leader of our country. Most of them don’t believe he’s a rapist. But many do believe that “all men speak this way about women.” They believe that “locker room talk” is a valid excuse. They are good, hardworking people that are concerned over their personal economy. They don’t want to think of such things.

I can’t help but think of these things. I think of these things every day. Every 109 seconds, we have a new victim to welcome into the circle of sexual assault survivors. Since I began writing this, the number has grown by at least 20. 20 people that are going to be told that while we don’t encourage sexual violence, we condone it.

Only six in 1000 perpetrators will end up being convicted. Why is this? Because we know that regardless of how many people believe us, how many people we have on our side, there will always be more that say “you can’t prove it.” That other things are more important. And in the topical case, that an accusation will be a distraction from bigger issues. So why would we want to go through the pain again? To rehash everything we’ve experienced, just to have someone ask, “Isn’t it time to move on?”

This election says that half the people in the United States do not stand by me. Do not stand by my brothers and sisters. I look at people differently now. I look at men differently now. I feel unsafe. That America has decided that if a man has enough power, and is loud and outspoken enough, they can look past appalling actions. When men say they vote for Trump, they remind me that the aggression Trump displays and the fear that his motions cause, are invisible to them.

To some, Donald Trump might represent change, and a new path for America. To me, he represents that everything is very much the same. 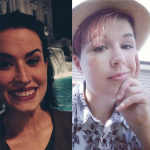 I'm a nursing student, feminist and ESOL teacher. I co-admin a blog focused on sexuality and gender over at Unladylike. I mostly just want to make life better.

Comments on Why I can’t get over the Trump election, as a survivor of sexual assault