Did you know that about 25% of the continental United States is in extreme drought conditions right now? Yikes. California, Texas, and other southwest states have it the worst, but in the past decade, drought conditions have meant water rationing in some states and higher food prices everywhere. That’s not all. The ’10s saw a long drought in Australia that led to deadly fires, and parts of central Europe are below normal rainfall levels right now. Climate change brings weather extremes, throwing once-regular rain patterns out of whack.

Even if your hometown is currently nice and wet, it might not be in the future. And besides, saving money on your water bill isn’t a bad thing. So try some of these hardcore hacks to save water…

If it’s yellow, let it mellow

Some will say “gross!” but, just put the lid down, and nobody will see or smell the pee (it’s the poop that smells). Toilet flushing uses the most water in all U.S. household activities at 26.7%, according to a recent study, so reduce the number of flushes and you’ll make a big impact. While newer houses have low-flow toilets or toilets with separate flushes for liquids and solids, that’s not as common in the U.S. as in other parts of the world. So go with this old hippie adage. And I don’t need to remind ya not to flush anything but pee, poop, and TP down the hole, right? It’s not a trashcan.

Smell-test your clothes instead of washing everything

Since clothes-washing uses 21.7% of household water, the fewer loads of laundry you do, the better. Re-wear your clothes instead of washing them — if they don’t smell or look dirty, they don’t need to go into the washer.

Shower with a friend

Saving water doesn’t have to be boring! Try a “Navy shower” with your partner (neither of you need to be in the Navy). Here’s how: get in the shower and get wet. Turn off the water. Lather each other up (…slowly). Turn the water back on and rinse (perhaps quickly, because, honestly, soap in your private parts isn’t nice). What you do next is up to your imagination. Since showers use 16.8% of household water, a short shower does a good deed while leading to a good time.

Turn off the tap

Any time you’re not directly filling a cup, bottle, pot, etc., turn off that faucet. Fourth in household water use, faucets drain 15.7% of your water, so use it needlessly.

Get creative when watering plants

I fixed my toilet and cut my water bill by 75%

My house has five toilets. I know, it's an embarrassment of porcelain riches. When we first moved in some of them ran occasionally, and I... Read more

Drippy faucet or showerhead? Toilet constantly running when you do flush it? Fix those babies! Leaks account for 13.7% of household water. If you rent, report the problem to your landlord, or fix it yourself (especially if you pay your own water bill). Offbeat Empire’s Kellbot shows how simple it is to fix a toilet, and check YouTube for tutorials on fixing leaks.

These are inexpensive, and they’ll save a lot of water. Much like fixing leaks, these things aren’t that hard to install, and you’ll be gaining valuable life skills (so my mom always said). Aerators are only a couple bucks each, so not really worth asking your landlord if you can deduct it from the rent. You can take a new showerhead with you, if you want, and put the clunky old one back on before you leave a rental, but again, these don’t have to be pricey.

Make the dishwasher do the work — don’t double the water used. Pre-rinsing wastes 6,000 gallons of water per household each year, says Consumer Reports, and unless your dishwasher is 30+ years old, the action is unnecessary. Instead, scrape any food bits off dishes into the trash immediately after eating, then put dishes into the dishwasher.

When boiling water for pasta or rice, you don’t need a huge pot full of water. There only needs to be enough water for the food stuff to move around a little bit — sometimes, you only need enough water to barely cover the food. Experiment with how little water you need. And when you do have extra water, let it cool off and then water plants with it.

Give one or two of these ideas a shot, and after those are established habits, try more. I learned a lot of these growing up as a hippie kid in the ’70s, so they’re suitable to families too.

Cutting back on your shower time? Shitting in the woods? What are the ways YOU cut down on your water usage? 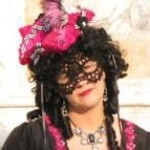 By day, Trystan is a high-tech writer and editor, and by night she's the Gothic Martha Stewart. On weekends, she travels back to the 16th and 18th centuries to be an aristocrat. A couple times a year, she travels around the world with her darling husband. Otherwise, they live in Silicon Valley with a silly tabby cat.