We know life isn’t a race. We know we’re not in competition with our friends. And yet, watching as their picks lead them to different adventures, it’s all but impossible not to wonder what we’re missing out on.
–Undecided by Barbara and Shannon Kelley

I grew up in a house my parents owned. All of my friends grew up in houses their parents owned. I think I knew one person in high school whose father lived in an apartment, and that was because he was recently separated from my friend’s mother, and he moved out of the house that they owned.

In my middle class upbringing, home-ownership was much more than the American Dream. It was just reality, and it was something I assumed would happen to me when I grew up.

Except I got my first job straight out of undergrad, and it was far enough away from home that I had to move and get an apartment. It paid just enough for me to make ends meet. After that, I moved back in with my mom and went into graduate school — paid for out of pocket — and there, I met my husband. We got married with almost no savings and WE got an apartment. And we liked it. No mowing the lawn, no purchasing appliances, no empty rooms — how can you argue with that?

We’re at that age where wedding invitations come like rain in spring. We’ve been to more weddings than we can count, and all of our closest friends almost immediately moved out of their parents’ houses and into beautiful, big, four-bedroom, three-bathroom houses with the intent to fill them up with babies as soon as they furnished the rooms. I’d walk into their comparative mansions and be struck with a pang of envy. Their cozy fireplaces and huge kitchens could afford me the entertaining opportunities I could never have in our apartment. So we started looking at houses.

Our search began with houses the size of our friends’, but ended abruptly when we decided babies were most likely not in our future. Then, we looked at town homes and condos, only to realize that sharing a wall again was not ideal. Then, we looked at smaller houses, all of which had something seriously wrong with them because they were much older, as no one seems to be building modest-sized houses anymore. Then, our realtor said to me, “Ashley, you’re going to have to be the one to pick this house. You’re the woman, and women are the ones that play house.” Direct quote.

I snapped, and we decided not only to fire our realtor, but to quit looking all together. His ridiculous generalization made me realize something: I didn’t grow up playing house. In fact, when my friends wanted to play house, I persuaded them to do something different. Playing house never appealed to me. Now that we are grown up, I’m seeing my friends’ adventures as the only option rather than one in a series of choose-your-own endings.

We haven’t picked our ending yet — far from it. But knowing we can is the first step to happiness at home. 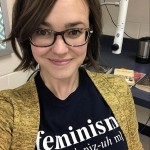 Ashley is a high school English teacher in the Chicago suburbs. You can find her writing at Small Strokes and Gender Across Borders.

Comments on Playing house is not my next adventure