I don’t want my daughter to be monogamous. Or polyamorous, or a swinger, gay, bi, straight or trans. “What’s left?” you’re thinking. What I mean is that I want to do my best not to lay out any expectations regarding the nature of my daughter’s future relationships.

I’m polyamorous, meaning I have a husband (Aaron) and a boyfriend (Lyal), and everyone has consented to it. But this has nothing to do with my daughter’s future (aside from the fact that she’ll have more close, loving adult role models).

What I want my daughter to learn from me about relationships is how to be empathetic, loving and attentive to others’ needs. Having been brought up by two very monogamous, traditional parents it has taken me a long time to recognize that their model — though a loving one — was very restrictive. For example, becoming a full-time working mother, something that shouldn’t be a big deal in modern times, was a huge slap in the face to my lifelong homemaker mother.

My family is judgmental about relationship and sexual lifestyles, too. My mom recently told me she’s glad I’m not gay because I wouldn’t have brought my daughter into the world. When Chaz Bono went on Dancing With The Stars, my parents repeatedly stated how grossed out they were by his transgender body. When I had my unexpected pregnancy with my ex-boyfriend, my mom reacted as if the world had just come to an end. They put on a strong face for me several weeks later, but in those early days they were destroyed because they now had the knowledge that their little girl had had sex before marriage.

Regarding my own role as a parent, though, it’s easy to sit here and say I’m going to teach my daughter proper words for genitals like “vulva” and “penis” and I’m going to explain sex to her, age-appropriately, and I’m going to tell her about all genders and orientations so she doesn’t grow up thinking some kinds of relationships are superior to others.

But there is more childhood-based bigotry ingrained in me than I like to admit. I get uncomfortable around gay couples sometimes, even though I have no intellectual problem with them being together. I try to refer to Elizabeth’s privates as her “vulva” or “vagina,” but if I’m bathing her in front of a family member or friend I just call it her “privates” or “bottom.” I still engage in ridiculous discussion with other parents about my daughter flirting with toddler boys, but I would never insinuate that she was flirting with a toddler girl. They’d just have to be best friends, right? That’s the proper thing to say?

Parents going poly: how to begin a polyamorous relationship when you already have kids

I am part of a couple who is considering bringing a third person into our relationship -- not just in a relationship, but fully integrated... Read more

Much of this probably has to do with where I live: a religious college town with a mix of young liberals and very conservative older folks. There are other atheist liberals like me, but it’s much more likely that any random parent at the playground is at least moderately religious or traditional, so I’m uncomfortable insinuating anything outside the norm about my daughter’s sexuality.

I think my solution is to refrain from assumptions altogether when I’m in public. I’ll stop playing along with other’s comments about her getting married one day, or meeting a man, or whatever. At home, I’ll adopt new words into my vernacular with her. I’ll illustrate differences through play — I can show her two girl Barbies kissing and two Ken dolls kissing.

And above all I must continue to work to get my relationships with Aaron and Lyal to a better place. All of my talking and theorizing is moot if I don’t show Elizabeth what it looks like to live and exist peacefully with loved ones. Only through effective communication can I build empathy and trust with my husband and boyfriend, and these are exactly the traits I want my daughter to internalize. 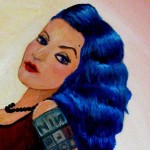 I write about polyamory at anonpolymom.wordpress.com under the pseudonym Heather Voss. I've written for The Bump, Global Post, MediaBistro, xoJane, Offbeat Mama and Mommyish.