Skip to content
My children do not know who my god is. They’ve never heard of him.

It happened when I was 18. I was going to an all-girls Catholic college, and one morning — a particularly chilly late-autumn morning in Massachusetts — I looked up at the chapel, and I couldn’t feel him. He was gone. It took a bit of adjusting. For 18 years I’d believed in him. To just stop, well, it was jarring.

He never came back.

All through my twenties — through the parties, the grades, the jobs, the boyfriends — I flitted by, needing no super power to help me or to ground me. I had me. I was enough. And I was busy, too busy for the god I believed in, certainly too busy for prayer. I was moving my feet. Of course, I didn’t know or care where they were taking me.

It was nearly ten years later when I felt my abandonment validated.

There I was, just turned 26, ready to burst with the twins inside of me. Two weeks before I had them, my husband lost his job. The house we’d recently bought for nearly a quarter million dollars was no longer worth what we owed. I was right, I thought smugly. If the god I believed in were real, how would He allow this to happen to two innocent infants?

Having a baby made me an atheist

Before she was pregnant, Amy was a regular church-attending Seventh Day Adventist, and after? Not so much.

I moved my feet again. This time toward my god, or so I thought. I figured maybe if I believed again, this god would believe in me, or at least help me make a better life for my babies.

I took a job as a journalist for a church. My boss was a priest. My god wasn’t there. If he was there, he was hidden under selfishness, greed, anger, misogyny and outlandish power struggles. At any rate, I never saw him.

The girls grew prettier and smarter and more charming every day. I was missing it. I was working long hours for low pay for the church, and I saw my babies for just minutes. I was slowly dying inside.

One weekend, as they toddled into the kitchen to get in my way as I did the dishes, I saw a glimmer of the god I’d believed in — and lost — all those years ago. It was in their deep brown eyes, a whisper through their curly hair. It was in their voices as they mastered “Mama.” It was in their laughter, in their tears.

The god I’d gone looking for when they were born wasn’t in the church. He was in my home.

My children do not know who my god is.

But they don’t have to. 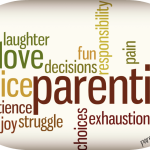