[related-post align=”right”]So there are some people who are a little embarrassed to hear about, um, well…ahem, “feminine issues.” This is not an article for them. This is an article for the other people who like to get all in other people’s personal business, but understand that because of the constraints of polite society, they can’t always ask all the questions they like.

There’s this thing called a menstrual cup! You may have heard of it. It’s a reusable alternative to pads and tampons in the form of a cup that fits comfortably up in your vagina and collects rather than absorbs menstrual blood. Different brands are available in both silicone and rubber, but it’s not my purpose to endorse any particular brand, just to tell you about the ways switching to a menstrual cup had a positive impact on my housekeeping.

I have a tiny bathroom in an old building where storage is at a premium. A big box of tampons would take up approximately 60% of all hidden bathroom space I have. Having a single menstrual cup has allowed me to free up that area for toilet paper storage, hair products, the boyfriend’s shaving accoutrements, and bathroom cleaners.

I love sleeping in. It’s one of my greatest joys and greatest talents. But if I wanted to sleep in on a heavy flow day, tough luck! I had to get up to change my tampon, or my bed sheets would pay the price. I have not conducted rigorous scientific double blind studies, but my menstrual cup has never failed me in this regard. If I want to be a lazybones who sleeps for 12 hours straight, I can without staining my sheets.

A menstrual cup generally retails for $20-$30 making it a little pricier than a big box of tampons right off the bat. But your box of tampons will run out. I will never have to buy another menstrual cup unless a) lightning strikes my current one or b) I decide to have kids, in which case I’d have to move up to a different model. I’ve been using my cup for 6 years, and I’ve saved tons of cash.

Blood gets stinky really fast. Ask anyone who works in the restaurant industry, and they’ll tell you, their least favorite job is cleaning out the tampon boxes in the bathroom. Since a menstrual cup collects blood, rather than absorbing it, I can just pour it out and flush it. My trash still smells like regular trash, which isn’t great, but is a world better than decaying tampon smell.

After a simple cleaning with hot water (and soap if you like), a menstrual cup is sterile and ready to be used again, as opposed to a tampon which goes straight in the trash with the thousands of its brethren that the average woman will go through in her life. I know that if there’s one thing all our offbeat homies seem to have in common, it’s that they care for our global home.

And for extra bonus hippie points…

So apparently menstrual blood is an amazing plant fertilizer. I know, it sounds gross, but let’s put that aside and just think for a moment. It’s a uterine lining. Your body was planning on growing a frickin’ baby in it. So it can probably grow some plants, right? I don’t have a garden to try this myself, but I have friends with menstrual cups who have done this, and swear by it. Many people might have knee jerk reactions to this — hell, I do and I’m the one who brought it up — but blood decomposes quickly, which makes menstrual blood seem pretty innocuous, especially considering some of the chemicals that commonly turn up in commercial fertilizers.

Have questions? Now is your chance to ask things you’d be embarrassed to ask about in person, through the magic anonymity of the internet! 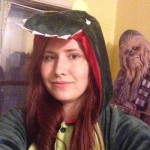 Elizabeth is a dirty hippie who loves all alternatives to disposable consumer culture. She also likes to know everyone's personal business, so it's only fair she give everyone the chance to know hers.

Comments on How switching to a menstrual cup helped my home: A TMI adventure