My two-year-old just learned to say “tattoo.” I have two tattoos, and he’s very interested in them. I’m not sure he understands what tattoos are — maybe he thinks Mommy’s skin just grew these intricate designs, like he grew the mole on his leg that he’s also very interested in.

Maybe one day he’ll want a tattoo of his own, and if he does, there are six rules:

I’ll admit this is kind of arbitrary, but it seems intuitively to be a good age. It’s when I got my first tattoo. Whether I made a good decision on it is up for debate, but that’s where the other rules come in.

I get to approve the design

I don’t have to love it, but it does have to be a good-quality, aesthetically pleasing tattoo.

There’s a good chance any tattoo done at age sixteen will eventually become regrettable, so it has to be some place that can be easily hidden. No neck tattoos. Obviously no face tattoos. No hand tattoos. No huge chest pieces. Forearm maybe, but we’ll see.

Ask anyone who got any one of those inked into their skin in their teens and I guarantee that most of them don’t like that band any more, don’t see that person any more, or aren’t quite so in love with the Tasmanian Devil. The tattoo I got when I was sixteen was a purple anarchy symbol on my ankle. Though I still sometimes read some of the great anarchist authors, my beliefs have changed. Luckily I was able to say that anarchy symbol was just an “A” for my first initial until I got it covered up a few years ago.

My husband and I both have tattoos, and our son is just used to them. He likes fake tattoos (he gives them to himself and... Read more

I get to see the shop and the artist’s portfolio

This is pretty common-sense. It has to be a shop that sterilizes its equipment properly, and an artist who is actually an artist. Same goes for piercings. No mall piercings for my kids.

There will be a waiting period

Hang your tattoo design on your wall and look at it for at least two months. I follow this practice myself. Unfortunately it means I haven’t yet got my next tattoo because none of my ideas have passed the two-month test. I’m all for impulsivity but not when it comes to something that’s going to be on you the rest of your life.

Maybe my kid won’t like these rules. Maybe he won’t want a tattoo at all. For now, I keep telling him when he pokes at my tattoos and says “Flowers. Tattoo. Mommy” in his sweet little voice that, if he wants, he can have one some day, too. 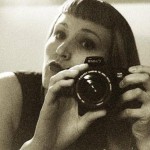 I am a nerdy carpenter and photographer in Northern British Columbia.

Comments on I don’t care if my kids get tattoos, but I do have a few ground rules