For most of my life I’ve been afraid to cook. I’m great at baking because, for the most part, I don’t have to see very well to do it. No, literally, I only see out of one eye. But with cooking, you can legitimately kill someone if you don’t do it right. So I live in fear of myself in the kitchen — until now.

I’m visually impaired, and teaching myself how to cook has been one of the things I have decided to do this year to make myself a better person. I’ve done a few things to make my kitchen more blind-friendly than it was to begin with, and as a result I’ve managed to do things like roast a chicken for the first time, have it turn out perfectly, and only have one minor panic attack about it. (Seriously, they should write on the recipes that some chickens come with pop out timers. I didn’t know what it was and was afraid it was going to melt into the skin of my chicken. Give a girl some warning!)

We outfitted the apartment with some new lights in the kitchen. This was the biggest and most important step, because without it I really couldn’t see anything at all in my kitchen, and was nervous I’d cut myself.

When we first moved in the kitchen had a single overhead light and two dark windows. At night it was a challenge to see anything in the kitchen at all. What we did was call in a friend who is a set designer and convinced him (with a bottle of bourbon and food) to let there be light. He set small halogen lamps underneath our cabinets so there was a lot of light on the chopping and cleaning areas. Then he set a three lamp head bar on a shelf above the kitchen table so that I could see my food while eating. It turned out to be brighter in there even with the original overhead light unlit.

2. Getting the right tools

On my wedding registry I registered for things that would help me feel more at ease in the kitchen. My vegetable chopper makes it so that when I need to mince things, or dice ingredients that are too slippery and I might chop myself, I don’t have to.

Another simple one was getting clear prep bowls. In this way I can sort out everything I need for a single recipe without getting everything mixed up, and easily find things in the right order as I drop them into the pot.

I abandoned the microwave and haven’t looked back

A few years ago I was watching an episode of one of Jamie Oliver's cooking shows. He noted, with an air of superiority, that he... Read more

Also, a large print meat thermometer was key. Even better would be if I had one that was backlit, but we didn’t see one of those in the store.

I also use brightly colored plastic spatulas and spoons, because if I can see them better, I don’t a) lose them, or b) find it difficult to lift things off a hot pan.

Slow cooking recipes are better than quick. It’s much easier for me to slowly pay attention to something over time and recognize when it’s done with timers, or with meat thermometers, than it is with something I need to sit on and watch carefully (except for shrimp because shrimp CHANGE COLOR!).

I’ve gone so far as to put the word out among my friends that I’d like them to send me recipes they like to use. Why? Because it takes away a lot of the struggle when I can look at a step by step guide for ease of cooking. Everyone kept telling me that cooking should be about improvisation, but for me it’s about figuring out how it all works to begin with!

Seriously, this was the biggest one for me. I had to learn not to be afraid of the kitchen, so what did I do? I roasted a chicken. A whole one. By myself. Then I made soup with the carcass. And both results were delicious!

I’m still working on things — like how not to freak out if a pan is hot, and how to make things tasty — but the learning process is on. And I’m slowly but surely becoming a good cook. All you need is a little red wine and some courage. 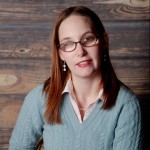 Elsa Sjunneson-Henry is a renegade feminist scholar who lives in the NYC area with her husband and two cats. She is a freelance writer who works from home and is learning how to be a better Author Housewife. She was previously on the Offbeat Empire as Snarkbat over on Offbeat Bride.