At Christmas time two years ago, I was the lowest I had ever been in my life. I was desperately trying to find some Christmas spirit, which, at the time, meant turning on the christmas tree lights while I worked from home, and trying not to dread the moment my then-boyfriend got home, and the immediate fight that would follow.

I was almost five years into an abusive relationship, and at best, I was bereft of both self-esteem and hope.

The good news is that a month and a half later, I finally got up enough courage to leave. At the time, I thought it was a temporary measure to help him realize that what he was doing was wrong. But it turned into a journey of recovery and self-discovery that I’m still taking today. None of it has been easy…

I moved back in with my parents, feeling as if I had royally screwed up my life

I was unemployed, out of shape, and so emotionally broken down that it was a struggle to get out of bed at all. Some days I didn’t manage it. Other days I made progress; I reached out to friends that I had lost touch with, I updated my resume, I started journaling… They were baby steps, but they were at least in the right direction, and under my own power.

It was almost a month after I returned to my parents’ house that it suddenly clicked that I was not the person I had been; in fact, I was not sure I was a person at all. I did not have any identity anymore; I had become a paper doll that my ex could dress to suit his whims. My entire being had become about what he had wanted from me.

The emotional parts would take time, I knew, but there was at least one thing I could begin to address that instant. I borrowed my mother’s car to drive to the local Walmart and purchase a cheap pair of exercise shorts and a sports bra. I stepped on my parents’ treadmill, with the first step of a Couch-to-5k program queued up on my phone. I barely made it through that first twenty minutes; I actually spent another thirty after I finished trying not to puke, but I did it.

The 3 tricks to staying positive in a negative world

It's so easy to be discontent with our bodies, our possessions, our lives; stepping back and realizing exactly how many amazing positives there are in... Read more

I can’t say it got any easier at first, but it did at least turn into a routine. I got up, worked out for an hour, cooked brunch, and spent the rest of the day job-searching. I spent the weekends driving to stay with friends, trying to re-kindle relationships that had fallen apart, as I had withdrawn into myself.

From these things — rediscovering that my body could be strong, recovering friendships that I had thought lost — came a new confidence.

Days turned into weeks and then into months. Six months, to be exact, until I got a job and moved out of my parents home. By this point I had graduated to an hour-long workout (in a vague approximation of crossfit), had started writing again, cut all ties with my ex, and had created an OKcupid account in the hopes of facing my fear of getting back out there. I was taking control of my life back, and it could only get better!

Of course, that’s also when I hit the first real snag. It had almost been a year, and I still had not faced the real question…

Why had I let it happen?

How does a strong, smart, independent 21-year-old wind up afraid that the only person who will ever love her is the abusive jerk that she can’t imagine leaving?

How does a strong, smart, independent 21-year-old wind up afraid that the only person who will ever love her is the abusive jerk that she can’t imagine leaving?

The fact is that, while I can (and did) come up with a near-endless list of possible reasons, I will never know for sure, because I will never be that 21-year-old again. I spent months trying to recreate that person, to get back to what I had been, and all it was doing was keeping me from moving forward.

One of my friends coaches a hockey team for adults. I pulled him aside and said, with all the confidence I could muster, “I’d really like to learn how to play hockey; can you help me get started?” I expected him to laugh. I didn’t expect him to say he knew a guy with a pair of spare skates I could borrow to get started.

As self-conscious as I usually am, I expected to feel my ears burning over and over as I struggled just to stay upright amongst a group of guys who were working on passing drills. Instead, I found myself laughing. And here’s the thing: as long as I was laughing, so were the rest of the guys. The ones who had picked up the sport as adults even got into telling their own stories about how they had learned how to skate and how bad they had been; the ones who had been skating all their lives gave me tips. Needless to say, I enjoyed myself so much that, despite fearing that I would never get good enough to actually play the game in any way, I decided to go back the next week. And the next.

At first I was only really skating at the clinic my friend ran, but the more I got into playing, the more I wanted to be out on the ice. I learned that a women’s hockey clinic needed a goalie for the winter, and meanwhile I picked up a few more games that I found online to get some more practice. I still sucked (to a certain extent, I’d say that I still do), and I worried a lot about what the other players thought of my lack of skills, but I was having too much fun playing to let that worry me once the game began.

What really struck me, was that no one cared about my past. I did not have to explain why I was not who I had been in college, or why I was no longer as “easy to get along with” as I had been — they took me as I was, and more than that, they accepted me. It was the first time in a long, long time that I had felt that welcomed, and it led to something even bigger…

Accepting myself was a fever dream. In my mind, all the progress I had made since that January was negligible compared to how far I had yet to go. That thought process had been holding me back as thoroughly as my low self-esteem and my desire to reclaim the “me” I had been in college.

There are still days that I wake up and cannot fathom how to get out of bed with the weight of this holding me down, and there are still nights that I lock myself in my apartment rather than facing the world. But I am getting better.

I’ve found that I can now critique my performance in a game (good or bad) without it reflecting on on my self-esteem. I don’t feel like I need to make excuses for myself either; if I need a night to myself, I don’t need to make up an elaborate lie to keep from feeling guilty.

The girl I left behind…

That college version of me was independent and fierce, strong and brash. She had never run into something she could not conquer. Looking back, I love those parts of her, but I’m not trying to be her anymore. In a lot of ways she was untried, untested.

I, on the other hand, have walked through fire. I may have tripped and fallen in the midst of it, and I may even have given up, curled into a ball in the heart of that inferno, but I eventually got up. Burned and defeated, I got up, and I kept walking. I might not be free of the flames just yet, but I’m still standing, still walking. More than that, I’ve found a passion in hockey and a depth of compassion for others, offset by the bitterness of moving on, that that girl never knew.

There’s plenty to love in the woman that I’m becoming, and I’ve grown enough to appreciate and accept those new pieces of me. 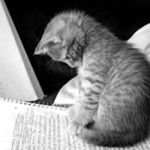 I'm a writer, graphic designer, and hockey goalie living just a bit north of Boston with an adorable (and insufferable) pile of cat.

Comments on How hockey helped me heal from an abusive relationship