My husband introduced me to Jillee’s site and I am in love with her cleaning product tutorials, and so HAPPY Jillee’s bringing her recipes to Offbeat Home for the next few weeks. Get ready to get spotless. -Cat

I fear my hot water bill is going to be SKY HIGH next month! For the last couple of weeks I have washed and re-washed and re-washed AGAIN load after load of dishes trying to figure out just the right “recipe” for clean and CLEAR dishes! After taking a good, long look at my own dishes, I had to admit that the homemade version wasn’t doing quite as good a job as the stuff in the green box I’d been using for years.

Of course the store-bought stuff hasn’t been doing as good a job as IT used to do either since the ban on phosphates in dishwasher detergent went into effect. It took us MONTHS to figure THAT one out.

ended up buying a new dishwasher because we thought our old one (which was pretty old) was not working right anymore. Turns out it wasn’t our dishwasher, but the new detergent formulations imposed by the federal government back in 2010. Apparently it has caused quite the uprising among the general dishwashing public. There’s even a website called Bubble Bandit that you can buy dishwasher detergent WITH phosphates (they sell “commercial” soap, which is NOT affected by the ban). Or you can go to Home Depot or Lowe’s and buy a box of TSP for about $4 and add it to your current detergent. You’ll find it in the paint section where it’s still sold as a cleaning solution for painters.

It’s all very complicated, and you’re probably asking “What does this have to do with me and my dishes?” Well, I think I have come up with a satisfactory solution without having to go the phosphate route… but I just wanted you to know it IS an option out there for those who are interested.

So, all that being said, after probably a dozen “test” loads of dishes, trying different combinations of different ingredients, this is what is working for us! I obviously can’t guarantee the same results for you, but I am hopeful you will see the success I have with it!

A kitchen sink organizer made of antlers

I wanted to get the sponges and other scrubbing devices out of the sink and out of the way, in such a way that they... Read more

Add 1 to 2 tablespoons of this mixture to your dishwasher detergent compartment along with 3 drops of dishwashing liquid. Do not use more than three drops. The dishwasher will overflow if you use too much dish soap!

Then splash 1/2 to 1 cup of white vinegar into the bottom of the dishwasher and start the machine.

Here is what my dishes looked like WITHOUT the vinegar and 3 drops of dish soap:

I have now used this combination of ingredients at least a dozen times with consistent results. I can’t tell you what a great feeling it is to open the dishwasher and be greeted by squeaky clean dishes washed with my own homemade mix. 🙂 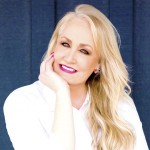 Comments on Make your own homemade dishwasher detergent