My little boy will have a little baby sibling this summer. He will be a big brother and I will get to witness the ups and downs of their relationship from the start. They will share a room and toys and our attention. They may be best friends, or not. They will have similarities and they will have differences, and I will catch myself comparing and contrasting them daily, I’m sure.

The thing is, there is another one… There is a little boy out there that is their half-brother that they may never meet. The only glimpse of him I’ve had is a phone picture of a phone picture when he was about six months old, in a snowsuit. I know very little about him aside from the fact that he has parents that wanted him more than anything. I donated my eggs to them in 2008. They know quite a lot about me, I know nothing about them.

I was 22 when I embarked on this journey. After years of interest in the idea of egg donation I saw a classified ad in a local publication of a couple looking for egg donor. I matched their expectations, and I went for the preliminary health screening and questioning at the couple’s clinic. Then was moved along for a info session and psychological screening. Nothing fazed me much, but I think back on the screening often now.

I was asked a question that didn’t seem to matter at the time: How would you feel if you donated to this couple and they had a child and then you were unable to conceive in the future? At the “mature” age of 22 I had no interest in having biological children. I was already married and my wife wanted children, but we were both comfortable with the idea of adoption or she would carry. At 22 I was quick to respond that this was not an issue for me; having biological children was not important.

A funny thing happened during that donation cycle. While my body was pumped full of hormones and many follicles in my ovaries matured for the purpose of giving another woman an chance to be a mother, part of me changed as well. For the first time in my life I had a desire to be pregnant. I started to think about carrying a child and being a mother in a very different way. Dialogue began between my wife and I and our plans for future parenthood took a different path. She was relieved that I would be interested in carrying because, while she was willing, it wasn’t top on her list of interest.

At 26 we embarked on journey to conceive. We did 6 intrauterine insemination cycles (five of which were medicated). At the end of this the doctor had no clue why it wasn’t taking. I responded well to the drugs, I had high quality eggs, I was young. There was no answer but there were a couple options… We could continue on the road we were taking or we could try In Vitro Fertilization. I wasn’t scared of IVF because I had been through the worst of the procedure as a donor. We decided to go for it. It failed for some unexplained reason.

Offbeat Mama Reviews: What to Expect When You’re Expecting

Apparently SOMEONE out there thought it'd be an awesome idea to turn What to Expect When You're Expecting into a film.. and I went to... Read more

It was at this point that my mind was racing. I feared exactly what I had discredited just a few years ago. What if there was a biological child out there from my eggs but I would never have the option of raising a biological child? What if it was the fact that I had helped another couple that I couldn’t help myself? Why wasn’t Karma on my side?

Shortly after the failed attempt we were successful at home with a “fresh donation” from a friend of a friend and self-insemination. I don’t have to necessarily worry about those questions anymore, but I have different ones now.

No part of me regrets the decision I made to be an egg donor, but I regret how I went about it, and the contract I locked myself into. I regret not requesting an open donation. I did not understand the gravity of my decisions; I believed I was mature and now I look back and feel like I was just a kid. This psychological screening checked in on a version of me I can no longer relate to, and the impact of egg donation on my life is tremendously different than I anticipated it being.

I will compare my children and notice their similarities forever, and, at this point, I wonder if I will ever stop wondering about the little boy out there. I wonder if I will get over my curiosity about his personality and facial expressions. Will he face similar challenges to my own children? Will he excel in the same areas? When the child is older he has access to my information (if his parents share it with him) and he could get in touch with me. My questions may be answered some day but there is an equal chance I will never know and my children will have missed out on the opportunity to know this person that has half of the same genes. 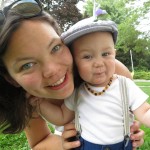 Rachel is a 29 year-old ex-pat who is a higher education professional. She married her wife in 2007 and they are raising their two kids in Toronto. This blog was written prior to the birth of baby 2 but the same curiosities exist!