Skip to content
I have never considered myself “fashionable.” Growing up, I had the tomboy thing down and wore jeans and t-shirts through high school. And then college. And grad school too. At a tech school, the girls who put in effort to look nice stood out (and had to deal with occasional backlash), but always seemed cool and confident to me. Every so often I would get the urge to “dress cuter” and swear not to acquire any more free unisex t-shirts, and wear a skirt here and there. But inevitably I ran out of outfits to wear and reverted back to the same jeans-and-t-shirt look, not because it was more “me” but out of habit and because it was easy.

Then, I decided this was the year that I would finally dress the way I really want to, as part of my quest to figure out what being an adult really means to me. After a few months of going through my closet, lots of online searching, and one exhausting trip to the mall, I am starting to get a wardrobe I really like and figured I could share some tips for those of you who also didn’t just figure this stuff out at puberty.

Like any good nerd, I started by reading as much as I could. Fashion blogs and Pinterest are a good place to figure out what styles you like, and just plain get exposure to new ideas. I also checked out a few books from the library about style and fashion, with plenty of pictures. Most of what I learned from there is what might work best with my body type, what the basics were, and how to mix up basics with the right add-ons to create something new.

Go through your closet

I had a couple drawers stuffed with the aforementioned unisex t-shirts. I kept my favorites for sleeping, lounging, and exercising in; then donated the rest. I now have a lot more space for new stuff, everything is easier to find, and I also dug up some nice things I had forgotten about because they had been buried. If you have things you never wear, that don’t fit, or that just plain don’t make you feel good, swap/sell/donate/toss!

Get basics, in multiples

I’ve been having a lot of fun looking at things like dresses and shoes, but most of what I wear is still based on jeans and a t-shirt. However, now I’ll go for something like a women’s cut V-neck that flatters me, and get it in several different bright colors. Jeans are really difficult for me, so when I find a pair that actually fits, I’ll get more than one. If you’re shopping and happen to find something basic that you plan to wear a lot and fits you perfectly, I would highly recommend getting several at once if you can.

Accessories are your friend

And, sometimes the cheapest and quickest way to change up your outfit. If I swap my Converse for a nice pair of flats, my backpack for a more structured cross-body purse, and throw on a scarf, boom: instant grownup! And definitely think outside the box. I’ve been trying colored tights while it’s still cooler out to make a plain black skirt or dress look spiffy. I’ve heard statement necklaces are a thing now, too.

Cleaning out the closet: looking at the concept of age appropriate clothing

I resist using this turn of phrase that every woman cringes to hear… "age-appropriate clothing" ... but women used to do this thing called "Aging... Read more

Get a few bolder pieces

I needed a jacket to replace the tattered hoodies I wear during those in-between seasons, so on a whim I ordered a cropped red faux-leather jacket online and I love it! It’s louder than what I would normally have picked before, but now I wear it just about every day, weather permitting. I also treated myself to a fun pair of shoes that I wear when I want to step it up a bit. If you can afford it, taking risks on one or two louder things is a good way to evolve your look without a complete wardrobe overhaul.

Understand the trade-off between quality and price

In grad school, I got a cheap pair of boots in the fall and wore them just about every day. By the new year, however, they were all scratched up and the soles had collapsed into a soggy mess after a really rainy night out, and now they just sit in my closet. So, after graduation, I treated myself to a nice pair of brown boots that cost over three times as much. I still wear them all the time, and though they’re scuffed, they are even more comfortable than ever and still look cool (plus, they’re waterproof). By the time they break down, I will have paid pennies for each wear I got out of them. On the other hand, those “riskier” items I mentioned above? I went cheap. A good rule of thumb is to be cheap with trendier things, and go for the best quality you can afford on things you know you’ll wear all the time.

Don’t be afraid to go online

I don’t know about you, but shopping in a mall is completely exhausting and frustrating. It’s still useful for certain things like finding those perfect-fit basics, but I’ve actually had much better luck online. Many places now offer free shipping and returns, and being able to read reviews (particularly about sizing) and see what other people wear it with has been awesome. So far, my favorite places have been ModCloth and Zappos, though there is tons out there.

Break your own rules!

Finally, this one has been both the trickiest, and the most important for me. I had to realize that I had been holding on to weird internalized rules that I had developed when I was growing up. After the “popular” girls rejected me in elementary school, I had fashioned an identity out of being a tomboy, and not concerning myself with any of that silly “girly” stuff later. So, I didn’t wear makeup, I never wore anything other than sneakers, and I hardly ever wore skirts and dresses unless there was some special event. Going to a tech school for college also didn’t help, as girls who took the time to look nicer also had to spend a lot more time proving themselves, amid subtle messages that feminine = inferior. All of that added up to me sticking to my same safe formula, and a growing sense of dissatisfaction with the way I presented myself to the world. So, it’s really worth examining what reasons you have for dressing how you do now, if it’s anything other than “it makes me feel good.”

Breaking out of my style rut has been an interesting experience, and a few months after I started I now feel happier about how I look and feel more confident when I go out. It will always be a work in progress, but my clothes are starting to reflect something that feels more “me” overall, everyone else be damned. Hopefully, if you’ve been feeling stuck too, some of these tips can help you out; and if you have your own, or any thoughts on personal style, I’d love to hear them! 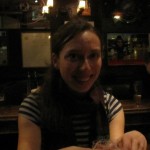 Jackie is a young mechatronics engineer living in the Bay Area. She loves robots, running, cooking and baking, and is really excited to start learning guitar. She is trying her best to figure out what is important to her and working on getting there one step at a time.