If you told me fifteen years ago that one day I’d be smoking weed and watching movies all day, and I’d be upset about that fact, I wouldn’t have believed you. However I suppose even in my stoner hayday if you told me that was the only thing I could do, I’d have considered it for a minute, but eventually declined.

I’ve fallen ill, I guess that’s the word — ill. I’ve fallen worthless is what it feels like. Not that I’m not fabulous on the inside still, I’m awesome, but my body has taken to no longer working, so the fab’s pretty hard to show.

It started out with getting what I thought was the flu a few times a year, in 2009. The number of “flus” crept up, and up, and up. This fall it never left, and a whole miserable host of symptoms had piled on by then, it’s truly been a nightmare. It seems to be something with my nervous system, I’m currently awaiting the MRI results of my brain. If you ever wonder how to make time cease to move… oy!

Vacuuming isn't hard. But when you have a chronic condition that causes fatigue issues like I do, sometimes it falls by the wayside. There are... Read more

Health-wise, a good day is where I’m able to cook a meal and do some dishes, or draw or write, for an hour or two. Many days all I can do is just lie here — as sound is irritating, and my arms are too weak to hold a book. I’ve taken a liking to bird watching. I think I’ll keep it.

This has been such a bizarre experience, but I’ve learned some things along this journey…

1. You have to be your own advocate and medical researcher

Which can be really difficult when it feels like every single friggin’ thing in your body is malfunctioning. But it’s not actually every single thing, it’s tons of individual things, and we are the only ones who have access to exactly what those symptoms are. Make lists. Research. Don’t rely on one source of information, always cross-check. Bring up all possibilities with your doctor. If they poo-poo ideas for no good reason, find a new doctor.

2. It’s stupid that we have to pick between MD’s and naturopaths

I’ve picked one or the other over and over and neither way has worked — I think they need to be a team. Our health system is bonkers. I’m trying for a naturopath as well as a specialist this time.

3. People will have opinions on your condition

Projection is when we subconsciously take our experiences and project them onto others’, assuming their experiences and motivations are the same as our own. People will assume your illness is the same as theirs, people will think you’re faking, people will think you’re terminal. Unless what they are saying is along the lines of, “You are such a badass, I’m sure you’ll beat this, how can I help?”, or helpful and pertinent suggestions, just ignore them. They mostly mean well, but they can be really distracting. Eyes on the prize.

4. Fake it ’till you make it! Unless you’re at the doctor…

The lessons I learned from my mom aren’t just about how to cure a sore throat (gargle with warm salty water) or how to ease... Read more

I’ve found that trying to pretend I feel good when I have to leave the house is helpful. It can distract me from my symptoms for short periods, makes me feel emotionally strong, and it feels better than the alternative. (I am of the smiley and friendly variety and not accustomed to scowling in public. People scowl back!)

However, I was doing this fake act at the doctor, which muddied the waters. I kept wondering why they didn’t seem to be listening to my words: “this has completely stolen my life,” “this is very urgent,” “extreme pain.” I felt like I wasn’t being taken seriously at all.

As things have progressed my ability to “fake it” is disappearing. And now my docs are taking me seriously! Jeebus. I’m real in front of doctors now. Even though there’s a bit of me that’s incredibly desirous of pleasant social interactions — that’s not the time or place. Save it for the cab, and be real with the doc.

They’ll think you’re hysterical and call “anxiety issues”. Unless you’re a man. Then your condition must be really bad.

6. You’ll learn about your friendships

I thought I had a great crew of friends in Portland, people came to my parties, and I had more invites than energy to attend them. Of that big ol’ gaggle of peeps… know how many I’ve seen since it got bad three months ago? TWO.

I’m not sure what to do about this. Maybe I was spreading myself too thin friend-wise, and not putting in enough time? Or is this just what happens when we get older, and lives get crazier? One thing’s for sure, I’m going to take finding a partner much more seriously once this is over…

As a single person living alone, I’ve been all by myself like 98% of the time since it got bad. However, being a single person living alone is my doing — I like solitude. I don’t like to be around people when I’m miserable and cranky. (See: #4, also likely contributor to #6.) This time has really cemented my relationship with me; I know myself really fucking well, and I love myself dearly. No matter what that MRI says, I think that that fact is going to help me get better. 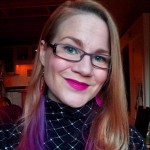 Meg Hartley has written for Tiny Buddha, Elephant Journal, Life Hack and Teen Vogue, among others. Her new book is called How I Lost All My F-cks, a one-month experience that will have you losing all yours!

Comments on Fake it ’till you make it, unless you’re at the doctor: 7 lessons for the chronically ill