In my little world of 19-year-old-ness I never knew what life was until I had my daughter. My life now has so much more meaning and purpose — her smile is the highlight of my day. Her cuddles are my favorite part of the morning. I want to show her the world, I want to give her the world, and I want to make the world a better place — because she is my world.

I now sing the ABCs at least 12 times a day, play instruments like the harmonica and xylophone, read books like Where the Wild Things Are, draw with sidewalk chalk, and jump on the bed. Sandwiches taste better when they are in the shape of a star and furniture looks much nicer when covered in crayon art. My alarm clock pulls my hair and asks me for a sippy cup and crackers. My evenings consist of story times and dance parties in the living room. My grocery trips now take three times longer than they used to, but I have the best little helper loading and unloading the cart for me.

Sound familiar? That’s probably because it is.

I’m one of the oddball teens who is happily married to a guy I’ve been with for five years, who moved across the country to re-locate to our dream city, has an adorable little apartment, and will be buying our first home next year. I’ve always been very proud of my “young mom” status and have tried writing about it numerous times. In all the times I’ve tried to talk about it though, the content has been either too defensive (don’t judge me!), too whiny (no one wants to play with me!), or too conceited (I won’t be dead by the time I have great-grandkids!). It took me a bit to come to the final conclusion that most mothers, regardless of age, just love being a mother. The rest is, well, whatever. There is no rulebook written by Mother Nature that specifies what age you can enjoy or flourish from all the fun little quirks and stresses of parenting.

I do believe some of my struggles directly deal with my age. I was a first-time mom at 17 and am on my way to having a second before I turn 20. Shit is sure to follow. I occasionally get eyeballed during toddler playgroups and sometimes blatantly questioned about my age by curious mothers. It really isn’t that big of a deal, though. The only time that ever bothers me is if it’s followed by sympathy or straight-up negativity — it just seems silly to me. Could you imagine asking a mother her age and then apologizing for it?

It’s also a bit difficult to make and keep “mommy friends.” It could be because of my age, but it could also be because I’m straight-up weird. Not everyone in the world is crazy, vegan, and highly energetic. The one time I considered going to a playgroup for tots of teen moms, it ended up being more like a support group… which is not what I was looking for.

However, these are just a couple measly struggles for me as an individual. No teen mom or otherwise will say the same thing when asked what they deal with. Everyone has struggles — that’s life. So really, the difference between a teen mom, a mother in her 20s, a mother in her 30s, and so on is: nada. And honestly, who cares? Age by no means affects your ability to be a mother.

I was only 14 years old, a cheerleader and on the track team; his dad was my first boyfriend, and I still played with my... Read more

Whoever you are, I bet you worry about your child more than you could’ve ever imagined you would. That your child’s pain hurts you more than it hurts them. I bet that you’d spend an hour cooing at them to see a smile, and that when their little hand wraps around your one finger you melt… just a wee bit.

That’s what is important. 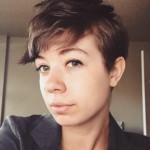 My B.F.F. (A.K.A. my hubby) and I are teen parents to two daughters. We are a natural, sustainable, vegan household that enjoy activities such as protesting, jumping on the bed, and hugging trees.

Comments on I’m a happy teen mom. I know, right?!?