You may have seen the Wall Street Journal article that’s now circulating called Why French Parents Are Superior. If you haven’t, I’m sure it will pop up on your Facebook feed sooner or later. In it, Pamela Druckerman, an American ex-pat living in France, talks about how French children seem better behaved than American children and French parents seem much more relaxed.

The part of this piece that really rang my bell was not the part about how well behaved French children are. To be honest, I’m not that worried about my kids having perfect table manners at 18 months old. No, the part that shocked me in the gut was the mention of a 2009 Princeton study that found “that American moms considered it more than twice as unpleasant to deal with their kids. In a different study by the same economists, working mothers in Texas said that even housework was more pleasant than child care.” Oof.

Also, “Nobody seems to like the relentless, unhappy pace of American parenting, least of all parents themselves.”

Sometimes you read something at JUST the perfect time such that it resonates too deeply to be ignored. I have to tell you that at one point this week I asked myself, “Do I kind of suck at this motherhood thing or is it WAY, WAY, WAY harder than advertised?” I have been breaking into a panicky cold sweat every time I think about soon having TWO young children, and then questioning what is wrong with me that I can’t even seem to handle one lately?

Do I kind of suck at this, or is it REALLY hard? Or… is there a third option? Am I doing it wrong?

I think I am doing it a little bit wrong. Not horribly wrong, but, you know, could use some tweaking. My problem is not my son Miles. He’s a good kid. Inquisitive, active, not a huge fan of sleeping, but he’s not a brat or ill behaved or a “discipline problem.” My problem is me.

I think I have a very common issue: I’ve let Mommy Guilt seep in to the point that it’s affecting my parenting in ways that do not benefit me or my child. I’m making choices motivated by guilt and feelings of inadequacy and insecurity rather than what I actually think is right.

Mommy had an abortion

“Don’t look at the screen,” the doctor said as she turned it away. But I already had. I saw a little blob with leg and... Read more

I wonder if American mothers get off on a bad foot with our almost total lack of proper maternity leave. I know, for me, this was the kickoff of a cascade of Mommy Guilt. Guilt over pumping and bottle feeding so he could have breastmilk while I worked when he should really be all-boob-all-the-time. Guilt over leaving him with someone I didn’t really know at the time. Guilt over leaving him AT ALL at eight-weeks-old. Guilt that he was mad at me for leaving him and that’s why he had tantrums in the evening. Guilt that he missed me and that’s why he couldn’t sleep. Guilt that I wasn’t LOVING EVERY MINUTE of our time together even though I had a break from him every working day. Guilt over having to be a disciplinarian when we were together when I just wanted to be the All Loving Ever Patient Mother Goddess.

Just hang out on social media long enough and they will find you… articles about how you’re inevitably doing it all wrong.

Now I’m working at home, but a pattern has been established. A hypothesis has been posed — You Are A Bad Mommy — and from there it’s all too easy to find research to back it up. Just hang out on social media long enough and they will find you: articles about proper attachment, articles about crying causing brain damage, articles about the right amount of time to breastfeed and what happens if you don’t, articles about discipline and how you’re inevitably doing it wrong. Who can ever measure up? No one I know. Not me. Even if you rationally reject some of these ideas, they are now in your head. One thing that I’ve learned in Hypnobabies is that negative messages get into your subconscious whether you consciously agree with them or not.

What I’ve realized is that it’s completely impossible to parent competently when I feel so unsure of myself. It’s impossible to enjoy parenting when this idea that I’m Not Good Enough is lurking way down below the surface.

What I have to face up to is that I’m on track to become a kind of woman that I don’t want to be: insecure, my behavior driven by conflicting emotions, giving too much and then feeling resentful that my needs are unmet. A kind of mother that I don’t want to be: inconsistent and unpredictable because I have no confidence in my decisions, overtired and cranky because I’m not taking care of myself.

I want to be a French mother! Eating cheese! Drinking wine! But most importantly (if Druckerman can be believed), a woman who exerts “calm authority” and takes time for herself, her husband, and her friends without feeling guilty about that.

Because I don’t want to deal with the protest, because I can’t listen to a simple toddler tantrum without tormenting myself over whether I’m doing the RIGHT thing every single time I make a decision. Whew. It’s exhausting. No wonder I am so tired and overwhelmed.

I have to get my groove back and return to the place where I started when I had Miles: feeling like I can do this.

I don’t want to let myself be bombarded with messages that make me feel guilty and inadequate; it’s tricky because as a thinker, a writer, a blogger, I like to take in information, sift through things even if I don’t agree or only partially agree. But there has to be some kind of filter. Some kind of Bubble of Peace to protect me. 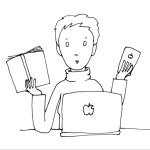 Comments on Banishing guilt to be better: let’s chill out and trust ourselves