“A wizard is never late, nor is he early. He arrives precisely when he means to.”- Gandalf

It seems to me wizards and babies have something in common.

In the days past my due date, we had tried pretty much every home remedy natural induction technique. Evening primrose oil, raspberry leaf tea, walking, pineapple, sex, chocolate cake, yoga ball, acupressure, Chinese food — but nothing had worked. I had made the choice through my pregnancy not to have any cervical checks so I had no idea how “ready” my body was getting, apart from lots of Braxton Hicks and prodromal labor, although the Doctor had concerns that I may not dilate properly due to a previous LEEP surgery.

On Tuesday evening (10 days late), we decided to try the final induction technique that I had been avoiding — castor oil. It was a last ditch try as the doctor and midwife had scheduled a medicated induction for Thursday evening. Four tablespoons in pineapple juice at 6pm, and two hours later it took effect.

On Wednesday 31st July (11 days past my due date and Harry Potter’s birthday) at 4:40am I woke up, coughed and felt a small gush. I clenched and rushed to the bathroom and declared that either my water had broken or I had peed my pants. It didn’t seem like anywhere near enough fluid to be all of my water.

I got back into bed and tried to rest a little, until 6am when the bad cramps turned into real contractions. I showered and the hot water felt really good on my back. As a couple of harder contractions hit me I got on my hands and knees in the tub letting the shower run on my lower back. After my shower I decided to text my birth support friend Maureen to let her know something might be happening that day.

At 8am my husband Dan called the midwife, and she told us to keep on labouring at home and let her know when we wanted to transfer to the hospital. It turns out she was just heading home from a late night delivery there. We began to time contractions; they varied from five to eight minutes apart. I practised deep breathing through my contractions, inhaling through my nose and exhaling with a humming chanting vocalisation.

At 8:30am my birth support friend called to see how we were doing. When I had to hand the phone over to Dan rather than talk to her myself she knew that today was definitely the day! She called out of work and came straight over. My contractions continued to increase in frequency and strength although they never hit a regular timetable pattern. I got through each one rocking on my yoga ball, chanting, holding my husband’s hand and pushing my head into it while he rubbed my back or held a hot pack onto my lower back.

On delivering my daughter at home, in my bed — and learning that the birth was really all about her

Olivia's home birth was absolutely something I wanted to do in my life -- part of my bucket list, if you will. I never imagined... Read more

I started to get double contractions: the first would hit and then just as it would begin to ease off, another surge of strength would take over and I was hit with another contraction. Although these contractions didn’t fit into our plan we decided to head to the hospital so I could use the birthing tub for pain relief. Dan spoke to the midwife at 10:20 to let her know we were going to the hospital, and she said she would meet us there.

It took us a little while to get the last of our stuff together and for me to get dressed and into the car (as I was trying to wait til one contraction finished before I stood up to walk), but the double contractions were hitting hard by this point. We only live five minutes from the hospital and arrived there quickly. We got up to the labor and delivery ward and the nurses began running the tub and preparing the room.

By this point my mood had changed quite a lot; I was trying to overcome my anxiety and panic attacks of medical interventions/being in the hospital. I could not find any position to be in that helped the contractions — even my yoga ball was not working for me anymore. The tub was ready and the midwife still hadn’t arrived yet, but the nurse said she would have to check me before I got in the tub — so I agreed.

I climbed onto the bed on my hands and knees using the back of the bed for support and let the nurse check me. My husband says her face went from all calm to a “Oh shit, I guess we’re doing this ourselves” slightly panicked face when she checked and I was a 10 with his head right there! Unfortunately I wasn’t allowed to get in the tub now, because the nurses were unable to do the delivery there. The nurse called for help in the room and told me to just do whatever my body wanted to do and very shortly after I started feeling the urge to push.

I didn’t count how many pushes I gave, but Dan estimates it was less than 10 minutes of pushing. I had lost most of my ability to speak, but Dan was amazing at reading my body language and hand gestures, including my “no scissors” hand motion to ensure that no one did an episiotomy on me.

Between contractions Dan gave me Capri Sun pouches to sip and during contractions he rubbed my back and talked me through it. I swore a lot and twice declared that I couldn’t do it, but Dan kept me calm and told me that I was doing it already. The ring of fire was painful and during a big push I felt his head crown — I thought that this was it, but he went back in. Apparently there was a look of shock on the nurses faces when I yelled “You little fucker, you’re not supposed to go back in.” A couple more pushes with more positive statements from me in between, like “Come on Xander, we can do it, down and out” and his head was out.

Xander quickly coughed up a huge lungful of fluid in the direction of Maureen who had to jump out of the way to avoid getting covered in it. His cord was wrapped around his neck twice, and they had lost his heart rate on the monitors as he came out so quickly that they had me flip onto my back to deliver the rest of him. He came out very purple followed by a huge gush of fluid which spilled off the table and into my husband’s shoe! Alexander Stuart was officially born at 11:38am, 7 hours after my water broke and less than 40 minutes after pulling into the hospital car park.

They immediately handed him up to me and laid him on my chest for skin to skin cuddles, and we asked that cord clamping be delayed and once it stopped pulsing Maureen cut his cord. My water birth plan went out the window but luckily, thanks to my preparation and education from classes, my son and I both had a birthing experience we were happy with. 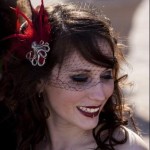 Mich is a crafty seamstress, who loves octopuses, superheroes and reads offbeat empire and Pinterest during the middle of the night feeds with her newborn son.

Comments on A wizard is born: my overdue unmedicated hospital birth story