This week we’ll be running posts that celebrate families we don’t discuss often enough — Child-Free, adoptive families, and families made of friends — to name a few.

When I was a teenager, I read this really great series of books — a sci-fi series about an alien invasion. Funnily enough, our son is now reading the same series. The premise of the series is that the characters are telling their stories but have to keep their identities a secret so they aren’t discovered. I’m always drawn back to this series because the blog I write has a similar premise: it’s a way to share the story of my family while keeping our identities protected. Sadly, there are way fewer aliens.

So now that you’re ready to read a great adventure novel — a gripping and dangerous story, surely — let me clarify: this is a tale about the lives of two men and their (highly opinionated) son. I do think it’s worth telling, but it’s a simple one about our little family.

Whenever we introduced James as our son, we’re immediately asked, “So, when did you adopt him?” From there we usually issue a dismissive response that doesn’t articulate our relationship and lives, and we end up finding ourselves telling the story of how we became foster carers (as they’re called in Australia), and in turn, a family. I hope that by telling this side to our story, more people will become motivated to become foster carers as well.

There are some days you’ll always remember clearly, and the day we decided to become foster carers is one of them. Lacking in the natural beauty you may be expecting for a day like that, we were actually driving home from the movies on a Saturday afternoon, chatting about our future. We were heading toward the pointy end of a decade and an engagement just shy of 12 months old, and the talk of children and the rest of our lives together was the focus.

Within Australia, adopting a child for a heterosexual couple is a logistical and expensive nightmare at the best of times, and a legal impossibility for a gay couple, so adoption wasn’t on the table. Our discussion moved to surrogacy and the options it gave us. By no stretch of the truth, many of our wonderful close friends had offered their “services” to us in aid of helping us to bring a child into the world over the years, and we began to talk about these people and those options.

We ending up weighing and debating the morality of bringing a child into the world when we had the opportunity to provide for a child who is already in need, which is the discussion that led us in an alternate direction: fostering.

We quite honestly couldn’t decide on a situation we were equally comfortable with. We ending up weighing and debating the morality of bringing a child into the world when we had the opportunity to provide for a child who is already in need, which is the discussion that led us in an alternate direction: fostering. After a lengthy discussion as to whether we could actually legally be foster carers, we simply turned to the wisest person in the car and asked Google. Falling short of a detailed accurate answer, Google was able to provide us with the phone number for the government’s foster care department, which we called on the spot and left a message to be returned at a later date.

Some days later I was surprised with a call from the department who completed a simple 20 minute phone interview on our motivations to become carers. After our interview she forwarded our details to their register of foster care agencies and within a few weeks a flyer had arrived in the mail inviting us to attend an information evening. With some trepidation we arrived and were welcomed with open arms and discovered some great information regarding becoming carers, most notably that being gay was NOT an issue — our professional and personal life skills were of more interest and with our background in health and education we were regarded as primary candidates for becoming carers. Most surprising of all was that many people can qualify as a foster carer. For example, you can be single, defacto, married, gay, unemployed, and full-time employed. You can care of children full-time or part-time, or act as respite carers (every second weekend, for example).

The criteria was only around your skills and ability to care for a child who had experienced trauma, which nearly all children in care have. We found there was extensive training provided (nearly nine months of training, interviews and assessments took place!), personnel support, financial support and even emotional support to ourselves as carers and the children in our care.

The process is always focused on reunification with the families, which makes your role as a carer absolutely vital in helping to re-establish positive relationships between the children and their families.

What we really took from a lot of that training was the knowledge and understanding that most children in care will return to the care of their families and loved ones at some point — whether this be a matter of weeks from entering your care or even up to two years. The process is always focused on reunification with the families, which makes your role as a carer absolutely vital in helping to re-establish positive relationships between the children and their families. We learned that nearly 70% of children will return to home, while just 30% will remain in long-term care until they come of age.

Training and information prepared us to realistically understand that a person doesn’t become a foster carer because he or she wants to have a child of their own– you do it so that you can help to have a positive influence in a young person’s life. They prepare you to understand that this is not “your child,” but you are there to love them and care for them as your own. It’s funny because we weren’t yet aware that we would in fact end up in that 30% and end up bringing a child in to our home who would not return to live anywhere else — the child who would become our family.

For now perhaps I can share with you a snapshot of our life as it stands. As I’ve been sitting here writing this, our son sleeps in his room. He’s been reading Harry Potter for most of the afternoon since we got home and has finally tired and fallen asleep. We’ve come back from a lunch for my nephew’s birthday where he has been playing and running around with the rest of our family who accept him as one of our own. He loves playing in the backyard at home, which he didn’t get to today, he’ll spend hours in the sandpit digging and shoveling and calling out “Dad! Daddy!” and dragging us out to show us something he dug up. Keeping him company in the yard is our family dog, with whom he has developed a unique bond, as he plays she stands guard, sitting in the sand pit or patrolling the fence line.

He chose some time ago to stop calling us by our names and instead chose to select us each one as “Dad” and the other as “Daddy,” something he indignantly corrects us on if one responds to the incorrect title “No, I wasn’t talking to you, I was talking to DAD, you’re DADDY!”. He attends school as normal, but he struggles with his work, in the afternoons we spend lots of time working with him on his handwriting, spelling and his maths, all of which he struggles with (the metaphor of “herding cats” is most appropriate).

After a life of inconsistent care he has fallen behind and we work hard to help him catch up. He’s no angel and like all children gets in his fair share of trouble. He is cheeky, adorable and knows how to get his own way with anyone! But he is loved and for the first time in his life is really beginning to feel and understand it. He has become our son and we live together — as a family. 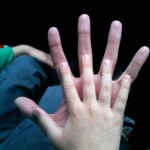 We are two gay dads, living with our son in Queensland Australia. We have started telling the story of our journey as gay foster carers in the hopes that it will motivate others to do the same.