Towards the end of my pregnancy, I was huge. So big that no one believed I wasn’t overdue or not carrying twins. My midwife and I were actually bullied by my backup OB over the baby’s size, so I fired him and we found another OB. After all, ultrasounds are notoriously inaccurate this late in pregnancy. My first was supposed to be 10 pounds and was 7.5.

I sat down on the computer and was checking out Facebook just past midnight on Saturday the 14th (due date was the 10th), when I felt like I had suddenly peed myself. I stood up from my chair and more fluid trickled out. I was all “WTF was that?” for a second then realized “Oh hey, my water broke!” After waddling down the hall to get stuff to clean up myself and the carpet, I gave my midwife a call. She asked about my contractions (which I had been having fairly steadily for a couple of weeks — gotta love prodromal labor) but they were still 10 minutes apart or so.

I let my husband sleep a while and started nesting a bit, getting stuff ready for the baby. Contractions went to about every seven to eight minutes and my midwife recommended I call my doula. I called Nerissa and she came over a bit before 3am. The hubs got up and we changed the sheets on the bed and put plastic under them. He pulled out the birth pool our midwife Jeanne had lent us and started filling it. The air pump stopped working a few minutes in. He tried a bicycle hand pump, but ended up outside in the middle of the night with the air pump plugged into the car (only way it would work).

Baby girl was posterior and giving me wicked back labor. Massage worked for a bit, but Nerissa had a secret weapon: a TENS machine. I was nervous at first, but man, when the really bad back labor started it was a lifesaver.

When Jeanne and her assistant showed up contractions were still six minutes apart. They wanted me to lay on my left side for a bit to rest and to encourage baby girl to move, hoping to prevent her from coming out posterior. THAT sucked — the pains got so much worse. Since it seemed I was still going slowly, they decided to head out for a bit and come back in a couple hours or when I called them because things had changed. By 5:45, I wanted them back. Contractions very suddenly jumped from every six minutes to every two minutes and got incredibly intense. The TENS machine was no longer helping because the pain was no longer in my back and I think I rather frantically demanded Nerissa “Get it off, get it off NOW!”

My husband had been messing with the pool and also taking care of our three-year-old daughter. The pool was not quite fully inflated so he pulled out the bicycle pump again, desperate to get me in the water since the pain was a lot stronger and it felt like gravity was actually working against me. I couldn’t find a comfortable position.

My midwife came back around 6:30 or so and pronounced me in “active labor.” I was already feeling a little pushy here and there. They say the tub is inflated enough and people start frantically trying to fill it. I’m kneeling on the floor with Nerissa at my side, trying to help me through contractions. I think I’m spouting things like “I can’t do this” and “Is it too late to go to the hospital and get the drugs?” Suddenly they’re all helping me into the pool — I guess they realized stuff was really moving now.

I started having symptoms of labor at 38 weeks -- a few weeks before I actually gave birth to my daughter, Luna. Experiencing labor signs... Read more

There was a bunch of discussion about a flashlight for the pool because apparently the one I grabbed wasn’t bright enough — I think my husband’s brand new military issue $40 flashlight was sacrificed to the cause, wrapped in baggies, and sunk in the pool. At this point, baby is crowning. It’s 7:44.

They were telling me to slow down and I’m like “I can’t.” I was trying to pant through because she was worried I was to going to tear and everyone looking started saying things like “Oh my, that’s a big baby”. I was thinking “No it isn’t, she’s gonna be like eight pounds. Whatever, let me push.” So, they get my husband situated so that he can catch — he didn’t get this chance the last time.

I started trying to push a bit slower, but the ring of fire was BAD and there was no way. Jeanne reached down to support my perineum and her head was OUT. My husband caught her then they both brought her up to my chest. Time of birth was 7:49. Jeanne is like “Oh yeah, that’s a 10 pounder.” I was cuddling my brand new baby girl as well as I can — very short cord — and shaking my head. “No, she’s not.”

We wait for the cord to stop pulsing and watch it start to go white and limp before cutting it so that I can get out of the pool more easily. I get on the bed — the placenta still hadn’t delivered — and started to snuggle my daughter. I was holding this tiny, adorable little creature with chubby cheeks.

My daughter was brought in to meet her sister (son took a peek but went back to his DS). Everyone wanted to know the weight, so the midwife brings out the scale. I was still openly skeptical about her size. They placed her in the scale and midwife says “Oh my.” I’m sitting there thinking, all smug-like, “Told you she’s not 10 pounds.” I don’t say this, thankfully, because Jeanne turns the scale slightly so I can see it and also announces the weight out loud: 10 pounds 8 oz.

Holy guacamole, you have GOT to be kidding me. I did NOT just have a 10.5 pound baby. Apparently I did. Amber was also 22.75 inches long and got a 9 and a 10 on her Apgars. She’s gorgeous and has the most adorable little crease across the top of her nose and chubby cheeks and legs and everything.

My birth was PERFECT… and I’m done now. No more babies. After pushing out a baby over 10 pounds, I have no more goals or regrets or “what ifs.” 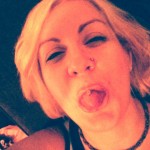 I'm a Navy wife, mom of 3, and daughter of bleeding heart liberal pacifists (and proud of it). I have an awesome, diverse, and open-minded family and am trying to raise my kids the same way. My hope is to go back to school soon to start midwifery courses. I can't imagine any better way to spend the rest of my life than catching babies.