Like a lot of people, I have a complicated relationship with my body. For as long as I can remember I’ve worried about being too “fat,” too “ugly,” too “not normal.” As I’ve gotten older I’ve bounced between self-acceptance and self-hate, with plenty of yo-yo dieting in the middle.

After getting engaged I started getting even more bombarded with messages about hating my body, losing weight, shaving everywhere, getting my nails done, getting my makeup done, styling my hair… Even more so than before, I felt the extreme pressure to conform to our society’s harsh beauty standards. I quickly realized that I wanted to love myself, not just on my wedding day, but every day.

Lucky for me, I was already part of the wonderful community here at the Offbeat Empire, so I knew that loving my body didn’t have to mean losing a ton of weight or spending a ton of money on beauty routines that bored me.

Once I realized what I didn’t want, I had to think about what I did want. It was clear to me that I had to change something in order to be happier with myself. If I wasn’t going to focus on calorie counting and the number on the scale, what would I do?

I knew I wanted two things: to feel physically and mentally good about my body. How could I do that? I broke it into smaller goals. I decided to do the Couch to 5K program. I decided to start eating more fruits and vegetables, and less chocolate and fried food. I decided to focus on media that presented positive images and descriptions of people of all shapes and sizes. And I decided that I would learn to use a sword.

Sucking at ballet class makes me love my body

I suck at ballet. Though I have been dancing for a few years, the style of the class I'm taking is extremely foreign to me.... Read more

I have never been an athlete. I’ve always considered myself too fat and slow for any sports, so I never put the time and effort in to learn them. Learning to run was the first time I ever realized that yes, this was a thing my body could do. It doesn’t always feel good, and it certainly isn’t easy, but running has shown me that my body is more capable than I thought. After just a few months of eating slightly better, stretching, and gradually kicking up my running times, I was able to run more than twenty minutes in a row, over a mile and a half! I’m not fast, and I’ll probably never win any races, but running has given me the gift of being proud of my body.

A few months after starting to run regularly, my fiance found a local sword fighting class. Even a year earlier I might have hesitated (“swords aren’t for people like me”) but thanks to my new-found confidence, I was ready to dive in.

We started taking classes with our local chapter of the Medieval European Martial Arts Guild in German Longsword technique. Almost every Saturday morning we practice the difference cuts, sometimes with a blunted practice sword, sometimes with a sharp sword. I pretend to be my favorite sword fighting heroes, like Alanna of Trebond from Tamora Pierce’s books. The sweat soaks my shirt, and I’m often sore for days afterward, but I feel like a million bucks. I’m not very good yet, but every week I can feel that my cuts get better, and feel more natural. Soon I’ll be sparring with the instructor, slicing reeds, and maybe one day I’ll even compete.

I’ve spent the last six months focusing on thinking of my body in new, positive ways. I focus on what I can do instead of my perceived flaws. I don’t wake up every morning feeling like the most beautiful woman on the planet, but I also don’t usually wake up in a cloud of self-hate.

Sometimes I still worry that various body parts aren’t good enough. I’m sure I’ll spend years, if not the rest of my life, working on loving myself and finding new ways to enjoy my body. For now I’ll continue to slay my body-image demons with my sword. 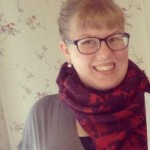 Emily K. Stamm is sometimes a librarian and sometimes a writer. Her hobbies mostly include things that would make her feel at home in a fantasy world, such as sword fighting, beer brewing, and hanging out with cats. For more of Emily’s thoughts on life, the universe, and everything follow her on Twitter @Stammily or on her blog.