When we moved into our apartment, the bedroom was a poorly-lit beige box. The only window looks out onto a light well between buildings, so the direct light is limited to about 20 minutes each morning. It’s also not a particularly large room — most of it’s taken up by our bed, and the closet is of the small, turn-of-the-century variety.

Family of four moves onto boat to find path again

When my husband and I met ten years ago on Orcas Island, we would spend a considerable amount of time dreaming of living alternatively. The... Read more

Further challenges: The room needed to accomodate a king sized bed, clothes for two adults, plus a changing area and a bassinet for our son Izzy, who’s now three months old. It’s also a rental, which severely limited our willingness to make major modifications.

With paint, decals, mirrors, and creative storage, we came a LONG way towards counteracting the room’s tendency to be a small, dark cave. Since the room initially seemed to barely accomodate two of us, this seems like a huge achievement! This is how we pulled it off…

We started by painting the walls green. We spent several weeks with paint swatches taped up everywhere to find a shade of green that didn’t make the room seem too dark. The result is a little on the pastel side, but I swear the room looks twice as large as it did before. Then we put up some tree-shaped wall decals that we got from Etsy. We do have very tall ceilings (10′ or more), and the decals help to emphasize that height.

We put in two cheap-but-sturdy dressers from the unpainted furniture store to house our clothes. We already owned the smaller dresser; the second one was purchased for its changing-table friendly height as well as storage. The “changing table” part of it is just a cheap changing pad with shelves and a tray nearby for diapering supplies. Nothing fancy, and it will be easy to convert back to adult space when he moves out of our room. A trash bin and pail for cloth diapers are jammed in along the sides.

Rather than take up floor space with a crib/bassinet/co-sleeper, we hung a bassinet for Izzy from the ceiling. This will work until he’s able to pull himself up out of it, at which point he’ll move to his own room. He usually spends most of the night in the bassinet, and then moves into bed with us after a feeding. I don’t have to get up to grab him out of it, which is great. And it’s on a spring, so simply bouncing it up and down a few times can be enough to set in motion half an hour or so of rocking that puts a fussy baby back to sleep.

A note on hanging things from rental ceilings: It’s not as hard as it looks. We used a stud finder to locate the beam, and then drilled a hole for the eyebolt. We tested it overnight with about 50 lbs. of cast iron pots and pans in the cradle. We’ll patch the hole when we take the cradle down, and it’s unlikely that anyone will take a very close look at that particular part of the ceiling anyway, since it’s 10+ feet off the ground.

To cut down on furniture that takes up floor space, and allow us to put the bed in the corner (pretty much our only option), we mounted two wooden shelves from Ikea in lieu of bedside tables. They’re sturdy enough to support a lamp, some books, and a glass of water. We also mounted a reading light on the interior side of the bed, so that person can stay up reading without climbing over a sleeping spouse to turn off the light.

We also installed lots of hooks on both doors, to hang up pajamas and belts and clothes in the “worn some but not dirty yet” state. It helps a lot to keep stuff off the floor, which is crucial with such a tight footprint.

Also visible in this picture are some of the many charging cords we have strategically positioned around the room. Because the outlets are inconveniently placed, we ran extension cords under the bed and attached a power strip to the bottom of the bed slats. So both sides of the bed have permanently installed chargers for our laptops and phones.

Not pictured are the storage bins under the bed where we keep extra sheets and quilts and things. They’re totally invisible and add a TON of storage.

We finished a few months before Izzy was born, and have been living in the room for about six months in its current state. We’re super happy with how it turned out. 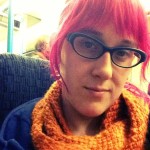 Alice lives in San Francisco with her husband and son. She writes software for a living, but spends all her free time making stuff. She documents these projects and sundry details of family life on her blog, Heteronormative Lovefest.