Recently, I took my two-and-a-half-year-old, Avie, to a Toddler Music and Movement class that, thanks to him, devolved into something more like Toddler Music and Mosh Pit. Most of the other kids were girls who twirled or held hands in groups of three or four and happily, almost dreamily, skipped around in circles while music played. Avie stomped, put his hands on the floor and kicked one foot up in his classic “trick” pose, ran around in his own circles wind-milling his arms, and finally, purposefully, crashed into one of the girl groups and knocked them down. Too far away to intervene in time, I watched in horror as I recognized the following flicker of cognition in Avie’s eyes. He saw the girl pile on the floor as a perfect opportunity for a pile on. So, without further ado, he flopped right on top. You can imagine how well this went over with the girls and their mothers.

I want to preface the rest of this by saying that I’m a parenting agnostic. After three years of poring over “expert” opinions, searching online forums, reading mommy blogs, chatting tentatively with other parents in real life, joining and fleeing a parenting cult or two, engaging in fierce Facebook battles, and amassing thousands of hours of personal experience, I’m done. For me, there is no right way and no infallible guru or philosophy. There are plenty of theories and plenty of critics. Every day I realize more and more how much of what I do as a parent is experimental. What worked yesterday might not work today or next week. I’ve got my guiding principles but otherwise it’s all improv, and sometimes, oftentimes, a whole lot of flailing.

One of the guiding principles my partner and I are committed to is raising our kids with as few gender limits as possible. Our intent is not to make them genderless or more feminine. We only hope that by giving Avie and his little brother, Izzy, the space and support to grow and explore without oppressive expectations, gender and otherwise, we will help promote a foundation of emotional health for them. Most of the critical work lies ahead of us when our boys begin to absorb the culture’s pervasive negative gender messaging at school and beyond. In the meantime, their drawers are full of colorful clothes and their toy boxes overflow with musical instruments, play kitchen gear, trucks, and carefully selected children’s books. When our boys get hurt or feel sad, we validate their tears and offer lots of hugs. We’re also cautious about the language we use to describe them, steering away from words like tough and strong, but generously calling them smart, creative, funny, and gooses. (Who knows what kind of harm that last one will do.)

So, I was a little rattled when around Avie’s 2nd birthday, a parent friend described Avie to me as “all boy,” implying that Avie was more boyish than his own son.

So, I was a little rattled when around Avie’s 2nd birthday, a parent friend described Avie to me as “all boy,” implying that Avie was more boyish than his own son. I trusted my friend’s judgment but reeled as I tried to understand what he meant. I still thought of Avie as my baby then, my sweet, sometimes irascible but cuddly, little buster baby. He wasn’t even a boy to me yet. And he definitely wasn’t more boy than other boys. But a real live masculine man and parent of another boy thought he was. And anyway, why did this bother me?

Not long after, on an extended-family vacation, Avie tumbled around with his older cousin, Seth, in a week-long dominance struggle. “Where’s Seth?” he asked once, holding a large metal flashlight. When asked why he wanted to know, he replied, “I want to hit him.” The family members present didn’t take him seriously until they heard Seth’s cries minutes later. Then Avie saw the movie Puss and Boots and fixated for a while on threatening others with “sharp things” like sticks and broom handles. Later, we joined a playgroup where I discovered that Avie was consistently the most likely to cause tears and/or injury among the other friendly boys and girls. Then we arrived at the toddler mosh pit experience.

I began to see what my friend saw. Avie is a physical kid. He has a lot of energy, a strong will, and little fear. I love these things about him. But as I’ve watched him grow and repeatedly menace our cat with heavy objects, growl at kids on the playground, and belly-flop on girl piles, a fear that I had failed in my pursuit to nurture compassion in my oldest son grew too. (Briefly, I also worried that I’d borne a sociopath.) I had been so convinced that, if given a supportive family environment, boys can be just as empathetic and thoughtful as girls. And okay, I admit it: I was harboring a little internalized misandry. I half-consciously believed that “all boy” kids were only like that because they were fed steady diets of macho BS. Well, a funny thing happened. Our special aforementioned guiding principle efforts led us straight to this: a roaring, hitting, sharp thing-wielding, playground tyrant, bear of a boy child (in purple pants).

And then I realized there’s nothing wrong with that. He’s only (almost) three and a lot of kids his age are wild beasts regardless of their home environments. Besides, at least one part of my failure was perception. Avie is all of the above but he is also affectionate, considerate, and sensitive. He was an early talker and sits in rapt attention for books and movies. He tells me that he loves me often, and hugs and kisses me and Izzy and his Duda (my partner) all the time. When Avie’s feelings get hurt (and they do, often), he’ll go sit in another room and hang his head until I find him to talk it out. He picks me flowers, sings songs, tells elaborate stories, and cannot go to sleep without cuddling with one of us. I see now that most of this softer side of Avie emerges at home. Out in the world, he’s still learning how to relate to others (Heck, at 32, so am I!) and for whatever reason, be it nature or nurture or neither (who cares anymore?), he just feels most comfortable presenting as “all boy” in public.

When I shared the toddler mosh pit story on Facebook, a friend and comrade in parenting outside the gender binary joked that we should come over “so Avie can hunt some game in the backyard while [her daughter] tries on dresses and bakes cookies.” I laughed and cringed, and I “liked” it. 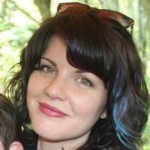 I’m a stay-home mom in my early 30s with two radiant kids, a professor for a partner, and dreams galore. One of them is to get back a writing life. I’ve scaled mountains of anxiety and swam miles of insecurity-infested seas just to get here. Let’s see what else I can do.

Comments on Parenting without gender expectations means accepting all outcomes