My daughter’s name is Ophelia. She also has two middle names plus a ridiculously difficult to pronounce Italian last name. I know what you might be thinking: THAT POOR KID. How will she ever learn to spell her name? How will she even remember all of her names? Won’t she always have to spell it for other people? Kids are going to make fun of her in school. She’ll be an outcast. What about a nickname?

What are the ethics of naming your child — can you use someone else’s baby’s name?

As days went by, I couldn't stop smiling and giggling when I thought of the name -- I know it's meant for my baby, and... Read more

I’ve heard the objections before but I’ve always loved unusual names so nay-saying never really had an impact on me. However, I have felt that if I planned to give my own child an unusual name it was my duty to really, truly examine those objections. Would giving my kid an unusual name really damage her? Would it turn her childhood into a string of memories she will eventually hope to forget? Am I being selfish and simply forcing my own contrariness on her? I considered each of these carefully and here’s what I came up with.

If you’ve spent any time around young children you know that their name is their identity. I once worked with a two-year-old boy who would toddle around, repeating “I’m Toby, I’m Toby, I’m Toby,” without rest. Kids love telling people their names, learning to spell them and practice both often. So is having a long name a challenge for a child to learn? You betcha. Is that a bad thing? Hell no! Since a kid’s name means so much to them, they’re willing to work extra hard to wrap their minds around it. The diligence and repetition of learning to spell and write a long name only gives them more time practicing vital skills. My daughter has exactly 30 letters in her full name. This kid is bound to be a spelling bee champ, I just know it!

Others will have difficulty spelling or pronouncing it

In the melting pot that is this country, a huge percentage of the population has a name or names that many would consider “difficult.” In plenty of cultures long last names are the norm. In others certain letters and letter combinations have sounds that would be unrecognizable to a native English speaker. Many, if not most, people have to spell their name when giving it to someone else for the first time. Rather than being a lifelong burden, I see this as simply a fact of life. Even if my daughter’s first name was Jane, her last name would still inevitably trip people up. Most parents wouldn’t dream of giving their child an alternative last name because theirs was hard to spell. First names are no different.

They will grow up to be outcasts

I grew up with perhaps the trendiest name of the 80s: Jennifer. Jenny I got yo numba! (Tommy Tutone, anyone?) My husband, Robert (Rob) has one of the most traditional names given to boys. I’m the kid that chopped her bangs into a spiky poof the day before her fifth grade class picture. Rob’s the kid that wore Hawaiian shirts every day of his high school career. We both had incredibly “normal” names and we both were huge dorks. Just as giving your kid a common name doesn’t guarantee their adolescent popularity, neither does giving them an unusual name cement their fate as the kid who eats paste. Their identities are shaped by their names but they are not limited by them. An “Electra” can be quiet and shy. A “Dudley” can be a Romeo. A name serves as a foundation for an identity but the kid decides the rest.

It’s cruel/selfish for parents to give children offbeat names

As cheesy as it sounds, the names I gave my daughter are a gift. Her first middle name was given to her in honor of my dear aunt that died a year and a half before she was born. Because I knew the two of them would never meet I wanted to give her something permanent of her great-aunt’s. Her second middle name is my maiden name, a name that is now shared by my husband and myself as our own second middle names. It’s an essential part of her family tree that should be reflected in her name. While I concur that it might be selfish to want my name and my aunt’s to be carried on, I can honestly say I did not give them to O to coerce her into my own brand of eccentricity. I think this is the case for all parents, whether they choose an offbeat name or a more traditional one for their child. In naming our children we try to give them a foundation, some history and maybe a little creativity. There’s nothing selfish about that. 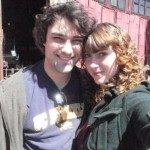 Jennifer lives in the San Francisco Bay Area with her husband, daughter, two cats and a rabbit. In addition to reading, writing, crafting and hiking she enjoys blogging about coming to terms with motherhood and her own family. She is in the process of becoming an elementary school teacher.

Comments on The pitfalls of offbeat baby names debunked