I made a resolution last year. Big surprise, lots of people make resolutions. But here’s the thing I realized about New Year’s resolutions. The big ones, the ones that matter, and that you really really REALLY want to keep and be successful? Ideally they’re not just for one year. They are habit-changing LIFE resolutions.

My resolution this year was The Compact, defined by Wikipedia as “a social and environmental movement whose members promise not to buy anything new for a year.” I was excited about this resolution, and I loved it. It was a great year. But, it’s not the type of resolution that you can sustain for life. Because even if I can put off buying a mattress for the year, eventually one day I still do need to replace it.

So here’s how my Compact experience went… In the first four months of 2014, I only bought two things: a birthday gift for my grandma, and something I had already known I would need to purchase thus established as an exception on the day I set the resolution. Keeping my resolution was surprisingly easy — realizing that I didn’t need these things that were temptations — and even freeing — not even being distracted wandering through the aisles “just to look” because I wasn’t going to buy anything anyway.

And then things changed…

As the year went on it became clear that there were some things more important than keeping my resolution. I didn’t immediately fill up a shopping cart at Target, but I did start to shell out some bucks. Two of my friends published books; in support of their years of hard work I bought copies. In January I had no idea that before the year was over I’d have to train for and run two very long and difficult races; in support of my health and safety I bought replacement running shoes that weren’t bald on the bottom. I went to Uganda and met widow merchants creating goods to support their families; in support of these women and the local economy I didn’t hesitate to spend freely and bring their wares back home with me to share with friends and family.

Coming up on the year’s end, I made a list of everything purchased in the past 12 months. It fits easily on a 3×5 card. But what’s most interesting is that I can recall every single thing. Every item on that list was purchased deliberately and with consideration, nothing was bought on a whim or just because it was cheap or on sale. Looking back at that list, I don’t regret any of those purchases.

So, technically, I broke my resolution. But I’m okay with that. Actually MORE than okay!

I went into the year with a goal of decreasing accumulation, spending, and waste. But if I came out the other side with the same habits I had prior, what would the point have been? Instead, I’m going into the future armed with a continuing life resolution to be thoughtful in what I own, how I spend my money, and the amount of waste I generate.

Living, and breaking, The Compact taught me a lot of things this year that I hope to carry well beyond a one-year resolution:

Stuff is awesome and there’s nothing wrong with having stuff. But it should be accumulated thoughtfully, responsibly, and with gratitude and joy. 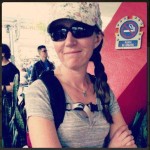 Alissa is SUPER excited to go buy a new mattress. Did you know you’re supposed to replace mattresses every 5-10 years? No wonder her back hurts after.. uh.. longer than that....