The idea to build a faux fireplace bubbled up slowly during my first few months of medical school. It wasn’t going to be functional — no flue, no chimney, nothing requiring structural intervention (we rent, after all). I just wanted to inject a little more soul into our place. We had this whole wall in our living room that we weren’t using — why not make something awesome?

I acquired a trunkload of bricks that someone was giving away for free on Craigslist, and dry-stacked them (no mortar, just gravity) on top of a folded-up old sheet, to protect the floor and the wall.

Since I wanted an alcove in my bricks, they’re two layers deep, with a board supporting the outer layer above the alcove. At this point the “fireplace” part was done, but I still needed a surround and mantle to bring some polish and make it look like something other than a stack of bricks.

I spent “who-knows-how-much” time (hours? days?) doodling plans in the margins of my school notes, striving for the perfect balance of “cool to look at” and “not too hard to build.” At one point, I emailed Ana White, the champion of the do-it-yourself Home Maker, and asked her to pretty please come up with a fake fireplace plan that wasn’t difficult to build. Lo and behold, she did! Some modifications were necessary to wrap the surround around my brick pile, but at this point I was ready to go.

Change the color of your cabinets without pissing off your landlord

I kind of hate wood. I'm one of those terrible, sinful people that will paint old wood furniture aqua, yellow, or antique white rather than... Read more

The awesome thing about this plan is that all the cuts can be made for you by the friendly staff at your local Retail Chain Hardware Store (Lowe’s, Home Depot, Menard’s, etc.), other than the arch in the front piece — which is classy and awesome and easy enough to do with a jigsaw, which I borrowed from the Berkeley Tool Library. Sometimes they charge a quarter or two per cut, but for the ease of getting it home in a little car — and also not having to worry about cutting my own fingers off — it’s definitely worth it.

It took a little while to find the time to tackle the building stage of this endeavor, but once the semester ended I was on it. In just a couple hours, I had everything cut, sanded, and attached – enough to hang stockings and lights and call it good for Christmas.

Finding a suitable piece of lumber for the mantle top took a few months — of course I needed an odd size, which can be pricy – but once I did, things wrapped up quickly. A neighbor who runs a cabinet shop out of his basement put a nice beveled edge on the wood for me, and with some paint and some stain (both of which I already had, from other projects) there you have it!

Altogether, this cost around $150 for supplies and labor and took only about three afternoons’ worth of work — getting and stacking the bricks, building the surround, and painting and staining — spread out over nearly a year. Now that it’s finished, I’ve been burning a few candles in it most evenings, and they give such a wonderful warm glow to the room. I’m hoping to score some wax LED candles on a post-holiday discount, so that I can fill the whole alcove with candles without concerns about catching things on fire. Also, since I can’t bear to put new holes in it and stocking holders simply aren’t up to snuff for my family’s celebrations, I’m using 3M command strip wall hooks on top of the mantle to hold up the stockings and lights.

Anyway. This is the story of how I installed a fireplace in my apartment, without doing any damage! 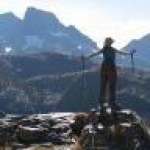 Katie has a love-hate relationship with medical school and a distinct distaste for capital letters. She's a midwestern girl living in Berkeley, CA, with her nuclear physicist husband. Together, they like swing dancing, homebrew, making jam, and other pastimes of their grandparents' youth, and are putting off buying a second car for as long as is humanly possible.

Comments on I installed a fireplace in my apartment