I'm sure we're all going to be celebrating Halloween this weekend. So as we head out to celebrate ghosts and all things freaky, let's talk about another kind of freaky… The freakiness of coincidences!

I've had short hair for years — we're talking short short — a pixie cut. Sometime last year I decided it was time to grow it out. Change it up. Stop paying for bi-monthly salon visits.

I powered through that awkward, shaggy-banged, teenage boy stage, clipped back the unruly tufts, and endured the bittiest horizontal ponytail ever. Then one wonderful morning, I realized my hair was long enough to braid. Glory!

Now I'm no braiding master, by any stretch of the imagination, but I made my best attempt at a french braid and spent the day strutting around the office like a crested crane. Needless to say I was pretty pleased.

Braiding, as I quickly learned, has invaded popular culture. My first instinct is to blame/credit YouTube for the phenomenon…

What with the huge number of instructional braiding videos out there that fall somewhere between tutorials and creepily intimate glimpses into a stranger's home life. (Is it just me, or does watching DIY beauty videos make anyone else feel like you're peering through someone's bathroom mirror?)

Braiding has a long-established, global history. From stone-age Saharans to Egyptian royalty, from Grecian goddesses to the men and women of the pre-colonized Americas, from Mongolian empresses to Medieval serfs: braiding has twisted its way into diverse cultures throughout the ages.

Which is why it's no surprise that braiding has become a popular textile technique in the fashion and accessory world as well. I won't bore you with a million examples — all it takes is watching one season of Project Runway to get the gist that braiding is back — but there are a few examples that stand out…

In the modern era, braiding has transitioned from the craft-heavy styles of the '70s —over-sized braided belts with bead laden fringe anyone? To a more refined take on the technique. Luxury handbag designers like Chanel have adopted intricate braiding techniques to add texture to dimension to their accessories. Because of the visible workmanship, consumers are willing to pay top dollar.

I recently walked by a bakery, and what did they have in the front display case? A mountain of challah, the traditional Jewish braided bread.

I picked up a collection of essays at the used book store, and it turns out that it was written in the newly-emerged style of creative nonfiction called, you guessed it, the braided essay.

This sub-genre is characterized by multiple story lines — I think of them as threads — that the writer weaves together throughout the essay, allowing the story to build and gain metaphorical depth. It's a way of telling a story in all its emotional nuance without getting on a soapbox.

Since the beginning of my sexual awakening (or when my high school boyfriend put his hands down my pants), I loved sex. Along with sex,... Read more

The braided essay opened up a whole new world in my running list of braids. Metaphor. And the list just keeps getting longer and more interesting. It's a great diversion, and strangely comforting.

It was really quite astounding all of the braids that made themselves visible to me when I just opened my eyes.

Let's collectively tip our hats to Mr. Jung for naming this fascinating occurrence.

Have you had an experience with this sort of haunting? Share it with us in the comments! 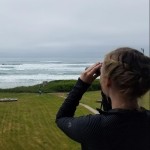 Katie Kapro is a writer and adventurer in the Intermountain West. She is presently working on conquering the illusive fishtail braid.

PREVIOUS
The awesome unicorn, dinosaur, and bulldog lamps from the Kid's section

NEXT
A decade of elaborate, handmade Halloween costumes that will make you go "how did she do that!?"