Skip to content
The changes motherhood brings are many and unpredictable. One change motherhood brought to my life, though, was very predictable: a lack of time to devote to personal grooming. I knew that I’d probably be sacrificing a lot of what I previously held to be compulsory and would come to see as a luxury: regular leg waxes, the timely eradication of split ends, achieving a perfect smoky eye, taking a shower and so on.

This turned out to be true for me.

Today, however, I would like to publicly celebrate an unpredictable effect of that very predictable phenomenon: the way in which my beauty routine did not disappear at all as much as it mutated in strange and wonderful ways. It is now wholly different to what it previously was: it would be unrecognisable, probably, to my pre-parenthood self.

But, I venture to assure you, it’s quicker. It’s cheaper. Hell, it might even be better.

Many mothers are dealing with a lack of time or, indeed, opportunity to consult a full-length mirror. No resources to devote towards luxuries (sometimes even necessities). Conditions that render sleep unpleasant, if not impossible. Scheming Texans plotting how to manipulate the next Tribal Council to take us out of the game… well, perhaps not that last one, unless your relatives are from that part of the world and your family politics are thornier than most. But you get the picture.

Here are the main principles of my new regime.

My daughter, Olivia, came home from her preschool and announced she needed to have long hair to be "pretty" and it wouldn't hurt if I... Read more

1. Take your preening opportunities when and where you find ’em

Sure, spare half-hours, those rare wonders, are perfect for a virtuous vacuum or vigorous sorting-out of the onesie drawer. Spare minutes, though, will come your way more often, and they are perfect for eyebrow plucking. Did you know — bear with me here — that going through the whole depilatory process outside can be a lot easier, and a damn sight more satisfying? As my daughter splashes in her paddling pool, I sit on the grass beside her with my cold-wax strips and a bottle of almond oil. The sunlight, in contrast to the meagre and artificial light of my bathroom, means that the results are superior. And the whole process is so much more pleasant!

2. “Product” is not always all it’s cracked up to be

Since I became a mother, I’ve given up my daily application of product to tame my curly hair after a morning shower (to be strictly truthful: it’s often the morning shower itself that is skipped). Surprise of surprises, my hair is thriving for it. No more dried and flaky gel, irresistible to scratch out of my scalp during the day. No more having to coax my hair out of its ponytail form long after I’ve removed a hair tie. For years I’d been convinced I had to put something in there to keep my hair under control. Simply not true. Now I buy good product, and I use it for special occasions — or for very bad hair days.

3. Not everyone suits bright red lipstick

I spent my youth trying to achieve perfect fire-engine red lips. Is it a coincidence that it is only recently, since becoming a mum, that I finally realised they’re not for me? No — the lack of time and energy I have for experimenting with make-up have brought with them a few such home truths. The principle has wider application. Not all make-up looks — no matter how fashionable, no matter how great they look on Katy Perry — are going to suit your face. Stands to reason. Stop trying to make them work; work instead with what you’re blessed with. There’s no shame sticking to one look. At the moment I’m having an intimate relationship with some shiny lipgloss — in fact, I’m just about ready to declare us monogamous. Somehow, the gloss compliments my odd-shaped lips much better than bright red could ever do.

Almond oil is completely natural, and completely pure. I first bought a bottle because I’d believed the hype about how wonderful it was for massaging your baby after her bath of an evening. It is that, of course, but it’s been months since my baby has reaped the benefits of this simple product: it’s too busy being applied to my face as a night-time moisturizer, or my dry elbows, or my legs. It’s cheap and versatile — add a few drops of essential oil for added fragrance or purpose: lavender oil to help you sleep, for example.

5. Let your hair get long

As a kid, I was always quite sure that as soon as I became a mother I’d get myself to a hairdresser and request the “mum cut” — short, practical, boring. Since becoming a mum, though, the thought has never even occurred to me. I like long hair, and I suit long hair. Since I haven’t had the time or the financial resources to devote to professional cuts, it’s become longer and longer. And I like it even more, and I suit it even more — or so I like to think. Since my daughter was born 22 months ago, I’ve had a few trims, and that bare minimum has more than sufficed.

I used to really appreciate a glass of wine or four with the girls. Now it’s more likely to be one glass, at most, with my husband over dinner. Because I’m still breastfeeding, I’d rather not overindulge, and anyway, these days my body’s more likely to yell “Stop, I beg you, or you won’t even be able to get up to turn off the TV!” after one glass of wine, rather than its previous catch-cry: the old “Woo, that was goood! Give us another one!” Instead, sleep deprivation has been obliging me to embrace caffeine, which stimulates rather than stultifies, and is arguably a little better for you.

7. Be prepared to crow and cringe about different things

I have a few more wrinkles, and my first grey hair. My butt and hips seem to have changed shape entirely, in a way that is more Beyoncé than Beyoncé herself would approve of. My belly button will never look the same. Nor will my breasts, of course. But, on the other hand, they’re smaller than they’ve been since I was fourteen, which is a treat for me. On the whole, I’m a healthier weight than I’ve been since before my pregnancy, because I’ve been breastfeeding the whole way through and burning energy at a rate I never have before. In short, if I’m bemoaning things I’ve never had to concern myself with before, I’m also loving aspects of my body I’ve never had cause to celebrate. And at the same time, inside, I’m still the same me I’ve always been: which makes me realise how irrelevant the surface stuff really is.

8. The ultimate truth: the only ones who matter think you’re awesome

In the past, and at various stages in my life, I worried about what my friends, my wider peer group, my colleagues, men I was involved with, men I wanted to be involved with, and even random people on the street would think of my appearance. Now, there’s only really a couple of people whose opinion when they look at me I really care about: my husband and my daughter, collectively the centre of my universe. My husband still finds me attractive. I hope. I’m still gettin’ some every now and then, anyway, so I’ll draw that conclusion.

When my daughter sees me, all she looks for is reassurance that she is secure, and safe, and loved. In return, she loves me back with a sweetness, a fierceness and a totality that has nothing to do with the stretch marks on my breasts or the split ends at the bottom of my (product-free) locks.

Ultimately beauty, for me, is in the eye of this little beholder. 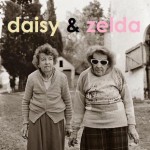 Daisy's a New Zealand writer, editor and mother of one who is currently pretending she's a local in a little Hungarian village with her Hungarian husband and semi-Hungarian toddler.