My kids are perfect the way they are. Every parent says this — well, maybe not every, but enough. We might even believe it when we say it (or a part of us does). But the same parent worries, too: my children aren’t getting enough to really develop into their full potential. I’m not doing enough to give them the best start in life.

I have worried about getting my kids services they need to be the best kid possible with the best tools possible. I have worried about giving them a team of experts who “know what they’re doing.” I have read book after book of admittedly helpful and useful information, but how helpful is it when, after consuming the words on a page, I lose sleep at night wondering if his life at school could be better, wondering how her self-esteem is coping? These books offer great strategies, but they do nothing to soothe a worried parent’s soul.

I forgot about my children.

I hadn’t even realized it. Then one day, a couple of weeks ago, I was cooking with my daughter. I don’t even remember what was said or what we were doing, but she said something particularly smart-alecky and looked up at me and flashed a sparkly eyed grin that seemed well beyond her five years… and it hit me.

My children are happy. Isn’t this the only thing that matters?

After everything they’ve been through, the trauma, the changes, the uncertainties; everything I had to pull myself out of to be 100% with them now, after all that, did I really forget what it was for?

How are you going to talk about drugs with your kids?

Here's how I think about a drug like marijuana: it can be fun, but it's by no means a path to greater enlightenment.

Then, the other night, my son had a school vocal concert. He stood tall on the risers and beamed widely until he saw us. And then, he positively radiated. Even before he ever noticed us, though, he was comfortable, confident, assured. And maybe it’s all in my head, but this hard-of-hearing mama actually heard her little boy’s voice sing out so loud she could hear him apart from the other 70 kids there.

My children are confident. Confident and happy. What have I been so worried about?

I’ve been worried my children aren’t making healthy decisions, they’re eating crap and watching too much TV. I’ve been worried they’re too loud/too withdrawn; too focused/too frenetic; too this/too that and the other.

Every parent does this.

And I’m here to tell you: stop. It’s not worth it. It’ll eat you up, and one day, you’ll look at your kiddos and realize you’ve missed a significant chunk of their childhood. I’m lucky. I caught it early.

I shouldn’t take all the credit. My son’s teacher helped. I spilled all of my worries out to her, and she said, “You know, I get it. I come home from work some days, and all I want to do is turn the TV on and zone out for an hour. I don’t even watch it. It’s just there.” I complained he didn’t like going outside and riding his bike anymore, and she said, “He really does love those video games, doesn’t he? You know, he seems to enjoy imaginative play with his friends here at school, and part of that is running around and pretending to be characters from those games. He really does love a good sprint!” Two beats later, she said, “I notice he’s also not just a good reader, but he enjoys reading. He’s quite intelligent.”

It’s a trip, this parenthood thing.

So quit worrying about your kids. Just watch them. Observe, marvel! They’re unique, constantly evolving specimens, and moments are too short to be spent worrying about how to make the world better for them.

Wanna make the world better for your kids? Remember one thing: you are their world. It doesn’t matter if your children are three, thirteen, or thirty. You will always be their world. 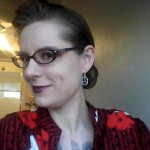 30-something accused hippie/hipster Deafie who spends the majority of her time chasing children and animals, including her beautiful wife. Downtime is spent cleaning the kitchen (yes, that's downtime), playing in mud -- aka gardening, canning, and fiber-crafting. Occasionally, she gets time to write.

Comments on On liberating ourselves from worrying about our kids