I work in the environmental field. For the last two and a half months, my coworker and I, the certified wetland delineators in our company, have been on the road for work. At the beginning of all this, she let me know she was finally pregnant after trying for the last six months! Hooray! This was promptly followed by two and a half months of morning sickness.

Now, our work is not what you would call manual labor, but does require us to be out walking for 8-14 hours a day in natural areas (aka: no roads or sidewalks. Lots of thorns and mosquitoes) in the heat collecting data. The experience taught me a lot about working while pregnant and how to work with a pregnant person…

How to work while pregnant (especially when you don’t have a desk job):

1. Tell somebody you trust at work

My coworker obviously told me because we were going to be out in the field together essentially all summer, but no one else is in the loop at our office. I know there is reservation in announcing anything before the end of the first trimester, but because she let me know the situation, I was much more willing and able to accommodate her needs while on the job. Having someone who has your back on a job makes everything so much nicer. If you don’t have a direct coworker your work with that you can trust, maybe let a supervisor know that you are still capable of performing your job, but you might need a little extra TLC as you go.

This one might be silly, but from my experience, it’s vital. My coworker is one of the hardest working people I know. She HATED feeling anything less than 110% and in the beginning would push herself to her regular work standard. Then she would puke and be waylaid for a few hours. Once we started working to her schedule, we were actually more productive. Also less puke.

3. Snacks and liquids: finding what works and consuming it forever

My coworker HATES drinking water. She’s essentially a camel. This did not mix with pregnancy. After some trial and error, she found that unsweetened tea worked well. So we stocked up on that. In addition, she found that while she couldn’t eat big meals, she needed SOMETHING in her stomach at all times. I’m proud to say that my suggestion of applesauce (for liquid, sugar and fiber) and beef jerky (for salt and protein) went over great. Of course she’ll never eat those things again once she’s done with the pregnancy, but they held her over until lunch and dinner.

4. Lots of breaks (both bathroom and just to keep cool)

Yes, we had a schedule to keep. Anyone who is contracted for a job knows that hours are money. But it was hanging in the 90s with can-wring-it-out-of-the-air humidity, which won’t help nausea on a good day. The air-conditioned car was a godsend. And I already have a tiny bladder, so am used to lots of pee breaks. This time I wasn’t alone!

How and when do you tell your employer you’re pregnant?

I just found out I'm pregnant! Incidentally, I was between rounds of interviews for my next job, which I start next week. The thought of... Read more

How to be a good co-worker to a pregnant person:

1. Having an iron stomach doesn’t hurt

My coworker threw up in front of me four times. Twice were in the car into a bag while I was driving.

2. Be patient and ready to go the extra mile

Morning sickness aside, my coworker was getting to the end of her first trimester at the end of our work. She was having trouble digging or bending over to look at soil pits. I had to shoulder a bit more of the work, especially near the end. I was hot, tired, cranky, and I’ll admit I kind of resented her for it. But no matter how I was feeling, she was all that PLUS more. In the end, we were able to complete our work on time without killing each other. She gifted me a pedicure as a thank you for being there for her.

3. Pregnant women are not made of glass, but there’s no shame in needing a little extra care

My coworker could walk for hours in the sweltering heat, but a two minute car ride down a bumpy dirt road left her incapacitated. Obviously her pregnancy is not everyone’s but being able to give her a little extra consideration meant she could be the best self on good days and at least make it through the bad days. 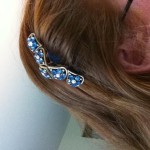 Beatrix is an environmental scientist married to a househusband. They are in year two of owning their own house that they share with two dogs and a cat.

Comments on Working while pregnant: How to both work as, and work with, a pregnant person