I’ve been thinking about reading comic books (or graphic novels? Are they different?) for a while, but I just don’t know where to start. I’d consider myself a pretty nerdy girl, but all my nerdy interests are TV/movie related.

Most comics have been going for years, so obviously I can’t start at the very beginning of a series. Should I should just grab the most current issue of something and start reading? Or will I be lost because it’s in the middle of a story line? Also, there are like a million different ones out there, and I want to get something good.

Can the Homies suggest some comics and a good issue to start with? Thanks! -Erin

Hey Erin! I’m in the same boat. I’m a comics virgin, but I hang out with a LOT of comic book geeks. Doctor Strange what now? Infinity Gauntlet who? I’m slowly starting to sort it all out and absorb a lot of knowledge by proxy. But here are MY tips, and then I’ll open it up to the Homies:

Grab your favorite comic-loving friend and ask them to guide you through the process. Ask them about their favorite comics and then ask them all the questions you asked us.

Find a home base

Have that friend take you to their local comic book shop and introduce you to the guardians of the geek knowledge. Once you get to know them, and they get to know you, they’ll be able to tailor their comic book recommendations based on your own tastes.

I just bought my very first comic recently… Ms. Marvel Volume 1: No Normal. My comic book geek friend recommended it to me since it was the first of a series, and the hero is, awesomely and intriguingly, a 16-year old Pakistani-American Muslim geek girl from New Jersey. That’s a hero, and a graphic novel series I can get behind. 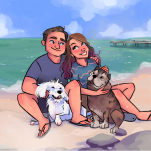 Erin is a crafty evil genius sharing her life with a husband and two dogs. She spends her free time sewing, baking, watching scifi tv shows, reading memoirs of the not-so-famous, and over-cuddling her dogs.

Comments on How do you get into reading comic books?