When I learned I was pregnant I knew immediately that my child’s room would include elements from my old favorite original Nintendo games.  I started working on items for him right away, many of which are still in his room today.

When you first walk in, my favorite piece that I cross stitched for him over the period of a few months, some while pregnant, and some after he was born, hangs front and center.  I got the pattern from Sprite Stitch.  In the frame are my own original NES games, the same ones I started playing at the age he is now.  He has started asking me to take them out so we can play them — not gonna happen.  We can play those versions on the Wii now.

The dresser is a recent addition, a thrift store find that I painted in ombre.  I posted more on this on my own website.  It wasn’t too hard and the results are awesome.  We have a mid century vibe in our home and I wanted something to reflect that in his room.

The Mushroom piggy bank is an eBay find.  I painted the frame for him while I was pregnant and it has survived so far, though now it seems a bit babyish.

Are you ready for an orange treehouse kid’s bed? YES!

Get ready to be CRAZY JEALOUS of a kid's bed -- I'm pretty sure you've never seen anything quite like it. Just sayin'.

I worked at a non-profit while I was pregnant and my boss gave me the best gift — a book called Fletcher and the Falling Leaves.  I’ve added to the Fletcher series collection since then.  Two Christmases ago my good friend, who is an art teacher and also runs a non-profit (Giving Diapers, Giving Hope), was tight on money so she made Fletcher a “Fletcher” the fox stuffie.  I love it.

The bed is the twin Malm.  I tried avoiding the character sheets as long as I could, but once he saw the Mario ones he had to have them.  The star pillow was another Ebay find.  Above the bed are three mosaics that I made while pregnant for his room.  Mario, a Galaga ship, and Link from Zelda.  Those are my favorite games from my youth (still are.)  I cut individual squares and glued them down.

Underneath his bed is a secret trundle bed.  His old bed was an Ikea bed given to us by my husband’s old boss, it was a strange one that would be shortened by folding the ends up.  I left one end off and added felt to the bottom so it slides, and now it is where Fletcher’s younger brother sleeps when we need his bedroom for guests.

My husband’s parents kept everything from his childhood.  We have all of his old Duplos, and Legos, and this little train hat hook was his also.

Fletcher turns 5 soon and he keeps asking for a “big kid room.”  The sheets were part of that accommodation. Hopefully soon we find a way to make it feel more like “his” room without going too far into the dark side of branded merchandise. 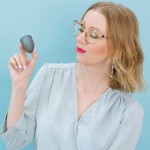 Kim Rosas is a work at home mom to two very energetic boys ages 4.5 and 2.5. After her first son was born Kim started her blog, Dirty Diaper Laundry, which became her full-time job.

Comments on My son’s Nintendo and Mario-themed bedroom