When I first met my acupuncturist in a small Brooklyn practice where a mechanic shop spewed fumes nearby, I took one look at her and hoped she would knock me up. In fact, I desperately hoped she was the one. The one who would know just where to stick those freaky needles for my womb to quiver and totally rock out a life force ready to take the world by storm in 9+ months. I hoped she was magic. I hoped it happened immediately.

But it didn’t happen immediately. Instead it took just six short weeks. Yes, I was beyond thrilled. The kind of thrilled that documents your first walk post-positive-pregnancy test as your first family outing. But I shared the acupuncture success story sparingly. My friends always cut me off in mid-sentence if I expressed fear that it was taking nearly a year to get pregnant. They told me it was normal. Why was I concerned? It wasn’t a big deal.

These were the same friends who had either never tried to get pregnant, or got pregnant without giving it much thought. And they also thought my getting pregnant after weeks of acupuncture was a coincidence. Or maybe it was my very slightly sluggish thyroid that finally woke up. Or the alleviation of work stress when I left a less-than relaxing staff job and went back to freelance. Surely those were the reasons why — maybe acupuncture just helped a little.

When holistic medicine works, it’s a placebo effect. Or luck. Maybe a fortuitous coincidence. Or perhaps successful with a combination of everything else you’ve done. But when traditional medicine works in forms of a prescription pad it’s considered concrete and absolute. Had I taken fertility drugs, everyone would have given kudos to its success and started talking pharmaceutical brands.

So I stopped talking about it. Instead I did what felt right for me. And that included exploring all my options before looking at traditional medicine and intervention.

I have a high threshold for physical pain and couldn’t care less about needles, but was surprised how much acupuncture didn’t hurt yet hurt all at once.

I had booked my acupuncture appointment after a neighborhood masseuse told me the knots in my back were too hard for deep-tissue massage and I should try acupuncture. She recommended a nearby practice and after checking out their website, realized acupuncture for fertility was on their list of services. I booked it after my 10th pregnancy test came back negative. Make that 10 months of pregnancy tests. I’m sure I took more like 25 tests compliments of the Dollar Store.

I have a high threshold for physical pain and couldn’t care less about needles, but was surprised how much acupuncture didn’t hurt yet hurt all at once. The needles were small and flimsy with flat bottoms. They looked nothing like needles in a doctor’s office short of being shiny and metallic. They didn’t hurt being flicked onto pressure points where they were magically held in place without breaking the skin. But the throbbing that ensued while they stood up in attention was uncomfortable. It felt like my body was radiating from their shiny spheres.

I felt vulnerable. And I don’t do well with feeling vulnerable. But I quietly sat and waited while my body awoke from its slumber.

Our lesbian conception story – how a salsa jar helped us get pregnant!

We always knew we wanted to have a baby, but having two sets of ovaries doesn't really help with that. Patty's best friend has always... Read more

The discomfort subsided and by my third appointment, I barely felt the needles or pulsating sensation that had initially followed. The acupuncturist kept a chart and asked me all about my cycle, my food intake, could tell what I ate by the color of my tongue, day-to-day symptoms, and anything else I felt like sharing. She gently flicked needles around my womb during specific periods of my cycle and took my pulse to tell me how various organs in my body were reacting to the treatment. I was adorned. I grew to love those little needles standing tall from the tops of my feet to the top of my head.

I didn’t really understand much of what my acupuncturist was doing and why, but I felt safe and centered, like my body was working together. I also found myself changing. I felt more confident and powerful in my vulnerability. The hour to unwind and clear my mind was a weekly gift. My husband could also tell a marked difference after an appointment. I felt calm and relaxed. My digestion improved and I slept better. I learned to wait in a way I had never waited before. Waiting for my body to catch up with my mind and vice versa.

I never felt more than rolling nausea from time to time, and aside from fatigue, I had no real first trimester symptoms.

My acupuncturist beamed when I broke the news of my pregnancy. In fact, she was the only person to know after my husband and I. She immediately switched to treating me for miscarriage prevention and to quell potential morning sickness. I never felt more than rolling nausea from time to time, and aside from fatigue, I had no real first trimester symptoms.

I felt like I knew a big secret no one else knew. Or that no one else would embrace without tainting it with stories of friends of friends and sisters of co-workers who had no success with similar treatments. But I had discovered the truth: not one treatment or technique works for everyone the same way. And rejecting one only suffocates your hopes and dreams from a world of possibility.

My husband likes to rub my ever-growing belly and talk to his child before we go to bed at night. She calms down and stops kicking to listen to his voice — something I hope that continues when she’s born. We love drifting off to sleep, just the three of us. But we both know there was a fourth, that it wasn’t just us who conceived our daughter; it was a stranger in Brooklyn who helped my body and mind align to make room for new life. 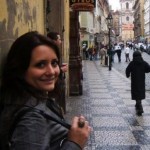 Susan Finch is a lifestyle and travel writer living in Atlanta by way of Brooklyn, NY. She blogs about her adventures with family and relocating during pregnancy at TheCreativeHomestead.com.