I overheard a coworker talking about his latest bow hunt excursion in Montana that landed him a moose and my ears perked up. I asked him about the story of the hunt and if it was scary hunting a 1000+ pound animal with killer hooves and a 9-foot rack of pointy antlers. He said yes, that it is daunting to shoot at something like that with just a bow, and then he asked me if I wanted some meat.

I was born in Michigan and grew up on game meat, A&W root beer, and rock and roll. I am more than familiar with deer but haven’t tried moose before. And I wanted to try this moose.

My coworker gave us — since he could not legally sell it to us — POUNDS and POUNDS of moose after it was ready. We have ground moose, moose sausage, moose chops, moose tenderloins and even a few moose bratwursts.

I have an inability to digest foods that come in any packaging, so I started learning to cook out of necessity. I took the need, bedazzled it with fun, and it became something I really enjoy.

We also eat completely for health so a lot of the ingredients I use are medicinal/holistic.

This is a great salad to pack for lunches. It'll keep for about a week in the fridge, but I like it so much it's... Read more

So when I filled my deep freezer with this luscious, truly all-natural meat my mind began to race with recipe ideas. Although not all moose recipes merely substitute moose for beef, I tried making some Mooseloaf last night and did it ever turn out yumtastic. Hubs ate it up, I cleaned my plate and I thought I’d share my recipe with y’all, in case you also come across a moose. (Sometimes you can find hunters with extra meat on CraigsList — they should only charge processing fees.)

When the loaf is cooked it should be a brown color all the way through (benefits of cooking with glass!) and the juices should bubble around the corners. Allow the loaf to sit for five minutes before serving to let it settle a bit and soak up its own juices.

If you’re the mashed-potato with meatloaf kind like we are, this recipe also pairs well with Greek Yogurt potatoes I made last night. They’re very similar tasting to sour cream-embellished mashies but the yogurt adds a cheesiness and complexity that sour cream just doesn’t have! Plus it’s loaded with protein and none of the fat sour cream has.

Serve up a spinach salad next to these two and that’s a dinner you can BRAG about tomorrow. 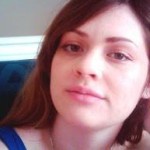 HiLLjO is the shortened version of my full name, Hillary Jo, that has followed me around for oh, decades now. I am a new wifey, furbaby momma, blogger, and a heartshaped sunglasses wearer. My partner Shawn and I just moved into our first home in late August in Omaha, NE and we hope to bring some funk to the neighborhood. I am a fledgling designer and I love to crochet, make sock monkeys and cook.

Comments on Mooseloaf with potatoes and a spinach salad