A couple of weeks ago, my friends and I created an adventuring party to start playing Dungeons and Dragons 4.0. We all got together one night and played using some miniatures harvested from HeroClix and a tiny map from a Lord of the Rings tactical fighting game.

While the first experience was awesome (we made those skeletons PAY!), we realized we needed more than one map if we ever wanted to adventure anywhere else. None of us has the money to dump into buying thousands of maps or printing them off. We needed a cheap and reusable playing surface.

After some Google-fu, I found that there are very cheap methods for creating a table-top RPG gaming board using tileboard (also called shower panels). It functions as a dry-erase marker board and allows the Dungeon Master to draw (and erase) limitless quests. Tileboard can be found in 8’x4′ sheets at your local “do-it-yourself” giant hardware store. 8’x4′ is way too bulky to handle (or fit in a car) so I had the employees cut the board in half, giving me two 4’x4′ squares.

The problem with using a dry erase marker board is that eventually every line you draw will degrade and rub off. This is important because Dungeons and Dragons combat is based on a 1″x1″ grid system. Without the grid, it is really difficult to tell whether or not that pesky Kobold is within range of your Magic Missile.

To make your own fully-reusable tabletop surface you need:

Gamers need lovin’ too!: How to love and live with a Gamer

My husband is a gamer. Not a random "whenever I'm feelin' it" kind of thing, but a serious GAMER. I, on the other hand, am... Read more

The best solution is to cut the grid into the board. Take the T-square and utility knife (borrowed mine from my girlfriend) and cut a series of lines one inch apart to fashion your grid.

After you have etched the grid into your board, slide on the edging. Tileboard is rather cheap and will chip pretty easily if you don’t protect it with plastic edging. For added glitz, we spray painted the edges sliver.

Total cost was $18 for a completely reusable gaming table-top that fits over Rockethaus’ dinner table and turns a dining room into a QUESTING LOUNGE! 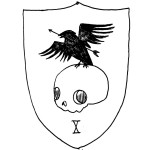 Tim the Low Level Wizard Accountant lives in Central Iowa spends too much time thinking about culture and occasionally over-intellectualizes very simple things. I recently stuck my toe in to the waters D&D and I might fall completely in.

Comments on From dining room to Questing Lounge: how to make a customizable table top-game board