To love someone who has been broken is a brave thing to do.

We have lived a life most know nothing about.

To the broken, love is a scary and volatile concept. Love isn’t sunshine and roses but thorns and monsoons.

To the broken, yelling and raised voices are a part of a typical conversation and something to which we are accustomed.

To the broken, threats are as common as a hello. Fear of retaliation and consequences has made us hesitant to assert ourselves or lead in any way.

To the broken, we know fear. Being scared and afraid was daily life.

To the broken, threats are as common as a hello.

To the broken, everything is a manipulation. Words have a double meaning and sweetness was never as it seemed. Therefore, preparation for the worst case scenario is second nature.

To the broken, hurtful words and name calling are typical. To be called a name or insulted is a customary part of disagreements.

To the broken, guilt is a feeling we deal with daily. We think guilt is just a fact of life and because of that we carry the weight of the world on our shoulders and then ask for more.

To the broken, jealousy is commonplace. It is our fault someone looks our way; we dress too provocatively in our tank tops to draw others in on purpose. To not need approval for clothing or conversations is a brand new concept.

To the broken, an apology is everything. When things have been at their worst an apology has always been how it’s repaired. No matter what damage was done, an emotional bandage was always administered and things were good as new.

We are not easy to love. I commend every single soul who has tried or loves someone who has been abused.

To the broken, your mood and actions are studied. A simple bad mood can become huge in our heads. Anticipating looks and dispositions have always been how we survive each day. Being willing to bend and be compliant meant we could make it peacefully through a day.

We are not easy to love. I commend every single soul who has tried or loves someone who has been abused. There are days when things are normal and the cracks and holes don’t show. You can’t imagine what years of emotional abuse can do to you inside and out. You can’t imagine the lies you will tell, the things you overlook simply because you want to be loved so badly. The broken are the ones who have been through hell but made it out.

Being broken can be beautiful and strong.

We have been torn down and built back up and endured more than most and despite that or maybe because of that, we are resilient. We love with everything we have. We appreciate the tender touches, the loving words, and the simple kindness.

For as long as I can remember, I have longed for a life over which I had control. I wanted to wake up every morning and be excited for my life. I wanted to feel strong and happy. I wanted to seek adventure and discover new things. I wanted to feel alive. After so many years, and making decisions that were not my own or made out of fear and desperation, I am living a life over which I have control. Because of my choices, I get to wake up every day to a woman who genuinely loves and who has seen my shattered pieces and took glue to each and every single one of them to piece me back together. She has given me a voice in my relationship and makes me feel equal, something I have never felt before. She gave me the strength to ask her to marry me. I had never been in control of my life in such a way before. She could have said no but she gave me that choice. She isn’t threatened by my strength — she celebrates it. She doesn’t speak to me as a child; her words are always filled with love and kindness.

She loves me as I am, pieces and all.

I never thought an abusive relationship would happen to me

You never realize just how thoroughly your world can be turned on its head, how easy it is to find yourself willfully trapped in a position that you swore you would never get taken in by. I never realized it. This is the sort of thing you expect to see on Lifetime original movies, not in real life. Not in your life. 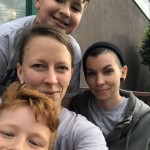 Heather is a runner of crazy long races, a mom of two awesome little boys, and a late bloomer in life. She writes because her life has been completely extraordinary and she has stories to tell.