Society places a lot of pressure on us regarding relationships. What is and isn’t supposed to happen has changed over the years, but our culture and the media seems to make this particular relationship trope the most popular:

I’m not ragging on people who follow the essence of this formula — date for a mid-range number of years, decide to build a life together, get married, and be true to one another until they die. But what about those of us for whom this formula doesn’t quite work?

Take me, for instance. Once I hit college age, I was very marriage-minded. When I dated someone, it was with the intention of evaluating their potential as a future spouse. However, I had this idea in my head that a) the person I dated and married was supposed to be a man (I turned out to be a late-in-life lesbian) and b) that this man would drag his feet to the altar. So it seemed totally normal to me that I had to harp about my relationship goals while all the guys I dated were less-than-enthused about my seeming “obsession” with marriage.

I felt horrifically guilty for this and thought there was something wrong with me. I brandished my online dating profiles with tags like “I’m not looking for anything serious,” and hooked up with people in an effort to make it seem like I didn’t care about marriage. But I did. It was important to me, and I honestly wasn’t interested in “let’s just see where this goes” dating, or “we’ll date seriously for a few years and then reevaluate whether or not marriage is right for us” dating, or “casual” dating. I was interested in, “I want to see if you’ll make a good partner and parent, and if not, then it’s time for us to part ways” dating.

Meanwhile, a lot of the people I dated were not interested in marriage whatsoever. They wanted easy access to sex, someone to confide in, and companionship — but without all those serious strings attached. They wanted someone who could conveniently provide these things and then move on, once it wasn’t easy for them anymore. But since we were young, it never occurred to either of us to communicate this.

I assumed that I would have to keep bringing up marriage until my partner finally (begrudgingly) conceded. They assumed that all women were “marriage and baby crazy,” and that once I brought it up it should either be ignored until their needs and wants in the relationship were no longer met, or even get rid of me once it was clear they were “commitment-phobic.”

Online dating: some reviews, some tips, some little green ghouls

My ex and I started dating when I was 19, and we were together for seven years. That's a lot of Formative Time in a... Read more

Here’s what I wish a loving older brother or sister figure would have told us (and what I’m passing on to you young Offbeat Homies out there): there is nothing wrong with wanting a casual relationship. Not in your late teens and early twenties, and not even in your late twenties, thirties, forties… you get the idea. You can have casual relationships for as long as you want, and you never have to “settle down.” Just communicate to your partner that this is what you want, so you’re both on the same page.

Alternately, there is nothing wrong with wanting a serious relationship that ends in marriage. You don’t necessarily have to do something as strict as the “courtship” route, but if you go into relationships evaluating your partner for their potential to create marital bliss, that’s fine. Again, communicate this to your partner and make sure your goals are on the same page.

Having dabbled in polyamory but ultimately realizing I don’t identify as poly, I will also say that it helps to make it clear to your partner whether or not you’re interested in monogamy. There’s no rule saying you have to be, so if you’re feeling something is missing in your monogamous relationship, do a little soul searching. Keep in mind that polyamory is not the answer to a desire to cheat — it requires a strong set of ethics and good communication skills. But if you think you’d be better suited to an open or polyamorous relationship, make that known.

Society and the media tell us that relationships follow one specific, prescribed route. That’s not the case. You don’t have to spend an inordinate amount of time in a relationship where your goals don’t align and you’re constantly bickering about where things are going to end up. And you don’t have to feel guilty if a potentially wonderful relationship ends quickly because it turns out one of you wants something more along the line of “friends with benefits” and the other wants to walk down the aisle in a more timely manner. You don’t have to feel bad if you call it quits because one of you is the sort that only needs one person to fill their needs and the other would prefer to keep the playing field more open, or even maintain deep, committed relationships with more than one person.

Not everybody fits into the role that society, the media, and romantic comedies say we should when it comes to hooking up, dating, relationships, and marriage. And that’s just fine. 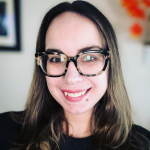 Aurora is a disabled queer vegetarian who enjoys doing crazy things with her hair and expanding her theological horizons. She is a hipster housewife and wanna-be radical homemaker who lives in the suburbs with her fiancée and their Chihuahua-Husky mix, their Lab-Chow mix, and Sir Winston "Ashens" Churchill, the most "sophistiCATTED" cat in the world. In her spare time she cooks, journals, creates art, and sings in the shower. She also blogs about her life and various mental health concerns.