Earlier this year, I took a singer-songwriter course at a local cultural institute, to improve my songwriting. Our tutor, singer-songwriter Rupert Blackman, encouraged us to play in public as much as possible. Go to open mics, play family parties, play for your friends until they beg you to stop, and also: busk.

I had never really considered busking before, but a few post-class sessions with my coursemates lit a spark within me, and now I am addicted.

I’m not here to give you busking tips though; I haven’t got nearly enough experience for that yet. No, in the spirit of my ukulele and bad art post, I just want to explain to you why busking is AWESOME, and why you should consider doing it if you play an instrument (or have other performance skills).

I enjoy playing my ukulele and singing songs, whether they’re my own or cover versions (I do a very quirky Wannabe). Doing those things on the street doesn’t change the inherent fun-ness, and fun is always my number one motivation for playing. Though the streets do add some other factors…

You connect with people

Sure, there are jerks out there who will sneer. But you’d be surprised by how outnumbered they are by the people who enjoy your presence! And it’s not just the people that give money — so many passers by just give me a smile, or a thumbs up, or a thanks. Kids, especially, are fascinated by buskers, and they are often adorable. It’s amazing to think I might have brightened the day of some passing strangers, if even just a little. And that, in turn, brightens my day.

I am lucky; I am not dependent on busking for my income. I work two jobs already. But I do admit — the fact that this is a hobby that brings in money, rather than costing it, is certainly a pro. It’s not a steady income in any way; the weather, the number of people on the streets, the location, and my performance all influence the amount of coins that get put in my little money bowl. But in my experience, I almost always make something — even if it’s just fifty cents. I generally just treat the money as a bonus for doing something I enjoy (see also point one about fun) — that way, I’m never disappointed if I don’t make much.

In today's society, with its emphasis on performance, it's so easy to feel pressured to be the best. Things aren't worth doing unless you can... Read more

Is the weather nice? Do I have an hour or two to spare? I just grab my uke and go! This spot not working? Dark clouds building up overhead? I’m out of here in two seconds as well. I’ve done busking sessions that were ten minutes long and sessions that were two hours long. I’m not tied to any schedule, I’m not required to be anywhere, and I can play whatever the hell I want (though, depending on the rules in your city, you can be required to leave or move).

You get more confident

Busking isn’t always easy — especially if you’re inexperienced. It can be pretty daunting to thrust yourself into public attention. The first time I tried busking solo, I was so nervous that all the chords and lyrics I thought I knew by heart just fell out of my head. I made mistakes, the mistakes left me flustered and embarrassed, and that led to more mistakes… I packed up again within minutes. But trust me; it gets better. At some point you realize that you won’t get laughed or booed off the sidewalk. That in fact, some people like hearing you! That’s a huge confidence boost.

You get used to the awkwardness of starting a song from complete silence in front of unsuspecting strangers, you learn to soldier on when nobody seems interested, and to gauge your audience’s reaction to know what does and doesn’t work. And those are life skills you can use outside of busking too!

It can lead to things

My tutor’s singer-songwriter career took off when he got spotted by a famous Dutch singer while he was busking. She bought his cd, and asked him to open up for her on her next tour. Okay, the tour was subsequently cancelled, but it did open a lot of doors for him. He got signed to a record label, has appeared on the biggest talk show on Dutch television and released a fairly successful album.

That confidence boost I mentioned above? It helped me to approach my favourite artist of all time, Canadian singer-songwriter Sarah Slean, after a show of hers. With my ukulele in hand, I asked her if I could play her one of my songs. And not only did she listen to and like my song, she let me play it on stage with her the next night, and asked for the lyrics so she could sing backing vocals! I don’t know if I would’ve had the guts for that without busking. But now I not only dared to ask her, but I also managed to get up on that stage and perform with a heroine, without dying a thousand nervous deaths. 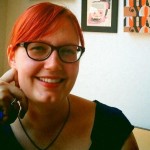 Lydia is a writer and aspiring singer-songwriter who lives in Utrecht, the Netherlands, with her husband and cat. She enjoys geeking out over culture and media and writing songs about medieval badass ladies.

Comments on Why you should try busking: Yes, even you!