My husband and I were usually met with three or four questions after we announced that I was pregnant. From the benign “When are you due?” and “What are you having?” to the rude “Was it planned?” and a fourth question was posed: “When are you moving?”

We were living in a one-bedroom apartment that was part of a larger family-oriented student living complex. And we’re still living there today. Sure, space is tight at times, and we’re always dreaming of a bigger home, but we like it. The complex is owned by the university, which means STUFF WORKS. After dealing with slumlords during our undergraduate degrees, knowing that the stove would be hot and the fridge would be cold and that toadstools weren’t growing in the bathroom was a Very Big Deal. We like the neighbourhood, as it has a good mix of renters and owners, a nice international population, and was within walking distance to the YMCA, public library, parks, and other important things. And the price is right — and price is key when adding another member to your family.

But people expected us to move. Jason and I had gone off the script, so to speak: we graduated and then got married, but neither of us had started our “real” jobs. Jason worked in sales, and I was just finishing my Bachelor of Education program. What were we doing pregnant? How were we possibly going to raise a child in a one bedroom apartment? Didn’t we know we needed a house and a yard and a deep freeze and a washer-dryer combo?

(Okay, I would like a washer-dryer combo. But I am willing to wait.)

We had already renewed our lease by the time I had a positive pregnancy test in hand, and I didn’t want to be bothered finding a subletter, or apartment hunting for the bigger place we apparently had to have, and hey: I like this place. So a little creative organization was in order, and we would figure things out as needed. My husband loves an organizational challenge, I am a continuous purger of stuff, and both of us are used to improvisation thanks to a few years of working in the theatre. Let’s do this thing.

We started by figuring out what was bothering us about the apartment — basically, what needed to change before baby arrived. Our most common complaints were dry air, not enough lighting in the living room, and a lack of storage in the bathroom. A few Sears gift cards bought us a humidifier, and we watched online sales and Craigslist/Kijiji for floor lamps and one of those over-the-toilet bathroom organizer things. Okay, good. We had taken care of our needs. But what would the baby need?

What would the baby need, indeed. Everyone will tell you their “must-have” list — from family members to strangers on the internet. Gift registries? You need everything from birth to age two, and you need it now… apparently. At the very basic level, our baby would need a place to sleep, clothes to wear, milk from my breasts, and diapers for pee and poo. Everything else would come on its own time. That meant we pissed off a lot of family members by refusing to register for gifts, but instead prepared a document explaining what we wanted and why. Exersaucer? No thanks, it’s too big and bulky. Folding Go-Pod? Yes please. I can’t say that anyone really paid any attention to the document, but it helped Jason and I suss out wants from needs, and allowed us to research the products that would best suit our livestyle.

I remember spending HOURS Googling many variations of "If I drink coffee will my breastfed baby be hopped up on caffeinie?" when my son was... Read more

Despite providing our wish-list and wish-list reasoning and spreading the word that gift cards would be great, we still were gifted with a lot of baby “stuff.” I get it — it’s way more fun to buy itty-bitty baby gifts than it is to buy a gift card. And we were really blown away by the generosity of friends and family. But our apartment looked like a mini Babies-R-Us once Georgia was born — an explosion of sweet florals and pastels once everyone received the all-important update “It’s a Girl!” We didn’t have room for it all, and we didn’t want or need it all. What to do?

Some things went into storage, either in large Tupperware bins, or to the basement of my parents’ house. Other gifts were sent to a family friend who had recently been asked to adopt her niece with very little time for preparation. But there was still more stuff — either we would have to rent a storage unit, or the stuff would have to go. This lead to some tough decisions: “But her nannie gave her that dolly!” “But that blankie is homemade!” Ultimately Jason and I decided that the act of giving was more important than keeping the object — and that once a gift is given, the giver no longer has a say about how the gift is used. This mindset allowed us to donate, sell, or pass things along, and helped us keep our sanity. It’s not always easy, but it works for us.

Once the issue of baby stuff was settled, we focused on the idea of “nooks not nursery.” I’ll admit it: Apartment Therapy, Pinterest, every parenting forum ever all made me long for a dedicated room for Georgia. I still dream of a room painted in Robin’s Egg blue, with bright and cheerful accents… someday, someday. But since a nursery wasn’t an option, I focused on what I had, and what I could do, and so we created baby spaces using the “nooks not nursery” motto.

The main nook was Georgia’s sleeping corner in our bedroom. Originally she slept in a wicker bassinet next to our bed, but at three months she moved into a crib. The transition to crib meant that our bedroom had to be re-organized, and one of my favourite pieces of furniture (an art-deco tall boy dresser) had to be put into our closet to make space for baby “stuff.” While I love having Georgia close by for night-nursing, I resented the presence of her baby stuff in my once fabulous room. Pastel blankies, sheets printed with ducks and ABCs, a Winnie the Pooh mobile… ugh. So not my style.

So I decided that Georgia’s nook was by extension my nook, and I was going to make the most of it. I covered the mobile in purple yarn and swapped the Pooh characters for jingle bells and a felted My Little Pony ornament. I put up art that was inspiring to me, yet still appropriate for a wee babe. Her sheets still annoy me, but I’m going to sew new ones once I find the right material (and the time).

Her other nooks are decorated in a similar fashion, and are spread throughout the apartment. Since I’m the one at home with Georgia, her space is my space, and I need it to be a place that makes me feel good and that reflects my personality. This will obviously change as Georgia develops her own sense of style, but for the meantime we have toys stored in an old Barbie box. Toiletries in a Beatles lunch tin. A fabulous Dr. Seuss-inspired wall-hanging above her change table/dresser. You may have noticed an emphasis on storage, and multi-function items. It’s pretty much mandatory in a small space.

Is it perfect? Is it my dream home? Far from it. But does it make me happy, and will it work for right now? Yes. I know we’ll have to make changes as Georgia grows, and I’m sure there will be a few grumpy relatives when it comes to gifts that have landed in the donation pile, but that’s okay. This is our first home as a family of three, and I’m pretty damn proud of it. 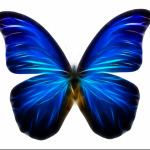 Mary B. is a theatre-jill-of-all-trades, educator, and a domestic artist.