When I was younger, I had a book with fabulous pictures of animals around the world, and the most prized page showed an alien smiling beatifically.

Okay, it wasn’t an alien, but axolotls (Ambystoma mexicanum) certainly have a prehistoric and downright Pokemon quality to them. What’s more is that with a big enough tank and the right care, they can live in your home.

In the wild, axolotls are Critically Endangered (if you own an axie and have ever put your comparatively giant hand into the tank, only to have them swim right up and try and eat it, you might suspect terrible survival instinct plays a part in this). If you were to buy an axolotl from a breeder or a pet shop, it is highly likely to have been bred in captivity.

Before pet owners got involved, axolotls were captivity-bred by scientists, because not only are they interesting to look at, they have a biological, Tenth-Doctor-in-a-Christmas-Special quirk: regenerative properties. As in, if they lose an arm (or tail, or gill), it grows right back again. When axolotls are quite small they can commonly bite off their brothers and sisters appendages whilst trying to eat food (why are they endangered again?), so this certainly comes in handy.

The second really cool fact about them is that they are neotonous, which is a Wikipedia article you should definitely read right now. Neotony means they live their lives in their larval state, and can actually sexually reproduce whilst still juveniles. They still grow teeny lungs, and occasionally you might see your axie swimming to the surface, grab a big gulpful of air, then sink slowly to the bottom again. One of my axolotls, Etrigan, has found a way to sink slowly to the top, which is both impossible and looks like he’s being taken by the Rapture. Axolotls can and have “morphed,” which means they grow lungs and lose the gills… it’s not good for their health, but I won’t go into it here.

How to keep them

There is lots of information on the web for keeping axies, the most well-known of which are Axolotl.org (whose page on “Cycling a Tank” you MUST read before getting these pets) and the forum Caudata.org. People can sometimes get a little snippy on the forums, but if you are interested in keeping these pets, stick them out, as they’re very helpful. Very basically though, you need:

Whatcha doing in the bathroom honey? Oh, you know. Just washing the hedgehog.

1. The Tank
If you can, get as big as you can afford — then if you want to get tankmates for your axolotl, it’ll be easier. The minimum for one axie is a 10 US gallon tank (or 60 litres). If you have more than one axie, go for a foot of length of tank per axolotl, so for example two axies in one two-foot long tank. Axolotls don’t swim that much, preferring instead to wander along the bottom, so footspace is far more important than height. Don’t go for one of those really skinny tanks, even if it is long, as they won’t be able to turn around.

2. Food
Earthworms are the best thing for Axies, however it’s not always easy for everyone to have access to worms. If you don’t have the space or equipment to keep worms, Bloodworms are an acceptable substitute. You can buy these frozen in tin foil cubes, and when the axolotls are small you can simply defrost them and hold the cubes in front of their faces, which they’ll then eat from your hand. They eat like Kirby — sucking in everything in front of them. This is why…

3. Substrate
You must keep axolotls on either sand, slate, or nothing. If you use gravel, they will swallow it when trying to eat. This can then cause internal problems that can sometimes be fatal if the piece swallowed is very big. Axolotls will try to eat anything. Some sources on the internet say they will try to eat anything smaller than the gap between their eyes, but I’ve seen mine go for bigger.

4. Hides
Hides are exactly what they sound like: aquarium decorations the axies can use to hide in or behind. Plant pots are perfect, but different axolotls prefer different things. Etrigan loves hiding behind/on top of the plants, whereas Dougal likes hiding behind more solid ornaments, preferring a piece of bogwood. Hershel owns the plant pot.

As with all pets, do lots of research before buying them to provide the best life possible for them. Even if this article hasn’t persuaded you to spend the 6-8 weeks necessary for cycling a tank and then thoughtfully acquiring some new axies (no rushing things with this pet!), then at least you can use that next X in Scrabble for a seven letter word. 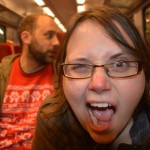 Since getting married, I've turned into a crazy pet lady. 5 points to Gryffindor if you can name the TV shows, comics, and video games my pets names are from: Etrigan, Dougal and Hershel (axolotls); Wingus and Dingus (goldfish); and Nemi the cat. Only 1 point for the Giant African Land Snail, Don Draper.