In the mid ’80s, my parents saw the movie Splash starring Daryl Hannah. Several months later, I was born, and she became my namesake. At the time, Daryl wasn’t as common as it is today, but growing up people knew it was traditionally a boy’s name. People always commented on it or asked about it, and when I was young, I didn’t want that extra attention. I didn’t want people to think I was weird or different. When I was a kid, I used to daydream about what it would be like to have a “normal” name, like Susan, or Linda.

My parents chose semi-unusual names for my brother and me, because they grew up with very common names. When my mother worked as a nurse, she once had four other Karens on her floor at the hospital. Whenever someone got called, they would all flood the nurses’ station at once. My parents didn’t want us to be one of three or four kids in a class with our name.

Throughout my life I’ve received a variety of responses when I introduce myself. There are people who just say “What?” or “Huh?” or “Carol?” and I need to repeat my name or explain it. A few years ago I started saying, “Daryl — like a dude.” Then there are the people who tell me that my parents must have wanted a boy.

The worst response happened when I was working at my first job out of college. I picked up the phone and said my normal script, which ended with, “This is Daryl, how can I help you?” Without missing a beat, the woman on the other end of the phone said, “Daryl huh? Your parents must not have liked you very much.” (Yes, really.) I remained professional and polite on the phone, but as soon as I hung up I had to take a long coffee break to cool off. I was so angry — how could someone be so rude? I know some people would give you that “a rose by any other name” blah blah blah, but what is more intrinsically you than your name? When someone attacks it, it feels like they are attacking you. I highly doubt that woman remembers me, but I sure remember her.

On the other end of the spectrum, the funniest response to my name is guys at bars who try to use it as a pickup line: “Why are girls with dude names always so good looking?” Oof. Come on guys, you can do better.

I once showed up for my first day at a part-time job, and my new coworker told me she had expected a stockboy. At another company, all the coworkers in my new department had been expecting a guy to show up. I’ve talked to customers for months via email, only to have them sound very surprised when I speak to them on the phone for the first time. It’s kind of funny that you could talk to someone for so long and that they could have a completely different picture of you in their mind. The hiring process is also interesting; I sometimes wonder if people have seen my resume and called me in for an interview expecting to see a man.

What do your kids call you?

I tend to not let society or scientific findings sway my mothering instincts too much. I, of course, accept certain social norms, only to make... Read more

The great thing about seeing different reactions to my name is that it immediately lets me know what kind of person I am dealing with. A brief period of confusion or a question about it is fine, but people who are openly rude or offensive? Those are the ones that I immediately know are not my kind of people.

When I met my husband, he never questioned my name. I thought that was odd — almost everyone I had ever met had at least asked about it. Then, a few weeks after we started dating, he went to visit his extended family and mentioned his Aunt Daryl. To say I was excited is a real understatement. I started asking a million questions and then I realized that was why he never asked about it; to him, it was totally normal. His aunt was the only Daryl in his life, so it never seemed strange to him.

Nowadays, I love my name. I love that there aren’t a million other women with it, and that people ask about it. I love when people say positive things about it and when they say, “That’s so different.” I love embracing the weirdness — the thing that makes me different.

When I was a kid all I wanted was to be like everyone else. But now that I’m older, I WANT to stand out, I want to be memorable. And with celebrities jumping on the girls-with-boy-names bandwagon ( I’m looking at you Blake Lively ) who knows? Maybe my parents were way ahead of the trend.

And the best thing? When you have an unusual name, people remember you. You have something that stands out to people and you’re less likely to fade into the background. You catch their eye in a way no one else can.

And at the very least, I get a laugh every time they call my Starbucks order. 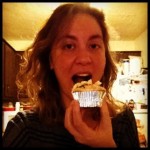 Daryl works for a healthcare technology company and lives outside Boston with her husband Ryan. You can find her reading comics, listening to records way too loud, and having intense staring matches with her cat, Agent Scully.

Comments on How I learned to love my weird name