Recently it was my husband Sam’s birthday, and I am always responsible for making cakes on such occasions. This cake, however, was no ordinary cake. This cake had been in the works since 2007.

Five years ago, Sam and his friend Vance had this conversation over Google chat:

Sam: We should invent a cake that has little tiny pies in it, that way you wouldn’t have to choose.
Vance: That may be the best idea you’ve ever had.
Sam: Yeah, way better than chocolate pants

Five years later, I decided to make that wish come true. I made a cake with tiny pies in it. Here’s how I did it.

Step One: The Pies

I decided to keep this part pretty simple, since I knew the whole thing was going to be a bit of work, and I didn’t know if it would actually work out in the end anyway. So I had Sam make some pie crust, and I just used some store-bought cherry filling to make some pretty adorable tiny pies. I used a mini muffin pan, which worked really well. If you don’t have one, I highly recommend getting one because they are a lot of fun!

In an effort to keep the flavor palate simple, I went with a plain yellow cake, which I often forget is quite delicious. I mixed the batter, poured it into the pans, and simply placed the tiny pies on top. In hindsight, I should have put the pies in upside down so they would end up being right side up once the cake was assembled.

I cooled the cake layers thoroughly, and assembled them as I would any other cake. I was afraid the pies would make the cake crumble more easily, but I think they actually held the cake together even better! I decided to make a simple whipped cream topping for this cake.

My experience in amateur cake decorating: aka How to make easy birthday cakes

My experience in amateur cake decorating has been really positive. People don't appear mad at my cakes (even if they are sometimes crooked). With a... Read more

I made this cake on Thursday, but had to wait until the party on Friday night to see if it actually worked, and if it actually tasted good. It was a fun and exciting time for everyone, because we were all trying something totally new.

I was nervous to cut into the cake because I was certain that the texture/density disparity between the cake and the pies would make the cake fall apart, but it actually did really well until the very end, when most cakes begin to fall apart anyway.

I was so excited to see it actually worked! And not only did it look really neat, but it tasted SO good! The cherry pie plus the moist yellow cake, with bits of buttery, flaky pie crust and creamy whipped cream — delicious! I honestly did not expect to enjoy it, but I really did! I think the key is to not over-saturate with flavor to keep the cake light. 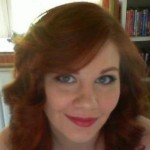 Amanda lives in Athens, GA with her computer guy/writer husband, Sam, and their two furbabies, Lindy and Sue. Amanda loves dancing, baking, and dancing while baking. She is a member of a swing dance performance group and a cabaret-style performance group. One day she hopes to open a bakery to share her treats with the public!

Comments on Never choose between cake or pie again: Put tiny pies in a cake